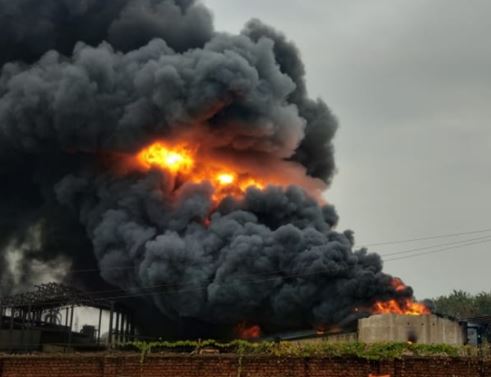 A fire broke out in a company in the cantonment area of ​​Bhilai. The company that is on fire is being described as a chemical company. The black smoke of the fire is visible from five kilometers away. The fire brigade team has reached the spot and the work of extinguishing the fire has been started. The company is being named Utkal Hydro Carbons.

Police said there was a fire in the tabletting section, where asphalt tablets are made. The company was on fire around one o’clock. During that time, employees were working in the company. The cause of the fire is not yet known.

There was also a blast in three drums around 2.15 pm, it is being told that there was chemical in them. A large crowd of people reached the spot after the incident. The Jamul police station has reached the spot to control them. At the same time, no casualty has been reported.