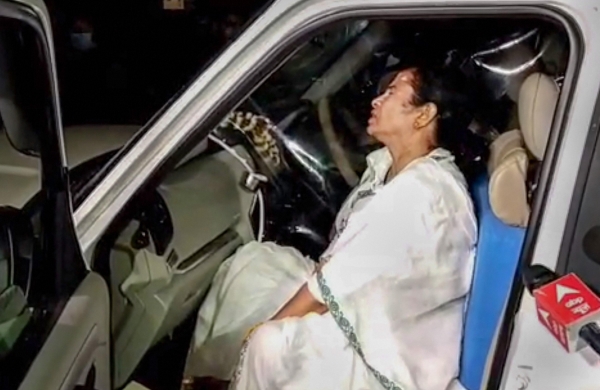 By PTI
NANDIGRAM: West Bengal Chief Minister Mamata Banerjee alleged on Wednesday that she was attacked by “four-five men” who manhandled her during the election campaign in Nandigram, because of which she was injured in the left leg.

The incident happened in the evening when Banerjee was outside a temple in the Reyapara area.

“I was standing outside my car with the door open. I was going to a temple there to offer my prayers. Few people came around my car and pushed the door. The door hit my leg,” she said.

Banerjee alleged that she was pushed by four-five men while she was trying to get into the car, following which she fell flat on her face.

The chief minister said that her leg got swollen because of the injury and she was feeling feverish, besides having chest pain.

Pointing to her leg, she told reporters, “See how it has swollen.”

“Some people deliberately did it. Of course, it is a conspiracy. There were no local policemen around me, neither the district police superintendent was present at the spot,” she alleged.

The chief minister also has severe pain in the waist, TMC MP Sukhendu Sekhar Ray, who is at present in Nandigram, said.

Banerjee was seen being carried by her security personnel to the backseat of her SUV from the front seat, which she usually occupies during travel, as she was in pain.

A white cloth was also wrapped around her injured leg.

The incident triggered a security scare as the chief minister gets Z-plus protection.

Banerjee, who was supposed to stay the night in Nandigram in the Purba Medinipur district, was rushed back to Kolkata, around 130 km away, through a green corridor.

#WATCH West Bengal CM Mamata Banerjee shifted to the back seat of her vehicle after she claimed she was pushed by a few people and suffered a leg injury in Nandigram pic.twitter.com/49wTQ5ye5S
— ANI (@ANI) March 10, 2021

She was taken to the state-run SSKM Hospital for treatment.

In the team were a cardiologist, an endocrinologist, a general surgeon, an orthopedist and a general physician, they said.

Banerjee was taken to the 12.5 special cabin in the Woodburn Block of the hospital on a stretcher as her convoy reached the hospital, amid a huge presence of her supporters who raised slogans against the BJP.

“We will stabilise her first. An X-ray will be conducted on her leg. We need to find out the degree of her injury and then the course of our treatment will be decided,” a doctor at the hospital told PTI.

Banerjee was in Nandigram over the last two days to campaign for the upcoming elections.

ALSO READ | ‘I am here to serve all: Mamata Banerjee prepares tea at roadside stall in Nandigram; visits temple, mausoleum

Earlier in the day, she filed her nominations in Haldia.

Banerjee is pitted from the seat against her former aide Suvendu Adhikari, who switched over to the BJP a few months back.

The TMC leadership claimed that the attack was a well-planned conspiracy to “remove her” from the poll campaign.

“Many people don’t want her to campaign for the elections. They want her to be removed from their path. That is why she has been attacked by goons. People will give a befitting reply,” state minister and senior TMC leader Subrata Mukherjee said.

The BJP alleged that Banerjee was trying to turn a “simple accident” into a “pre-planned conspiracy”, and demanded a CBI investigation.

“It can happen that she met with an accident but to claim that she was deliberately pushed is not acceptable. She has a lot of security personnel guarding her round the clock,” BJP’s national general secretary Kailash Vijayvargiya said.

“Such tactics to gain sympathy are unacceptable. I think the matter should be handed over to the CBI for an investigation,” he added.

State Congress president Adhir Chowdhury said such “tactics to gain sympathy” would not work this time.

“Mamata Banerjee is the police minister of the state and if she is not safe then she should immediately resign from the post,” he said.

CPI(M) candidate from Nandigram Minakshi Mukherjee wished her a speedy recovery, but asserted that “people would not be fooled this time”.