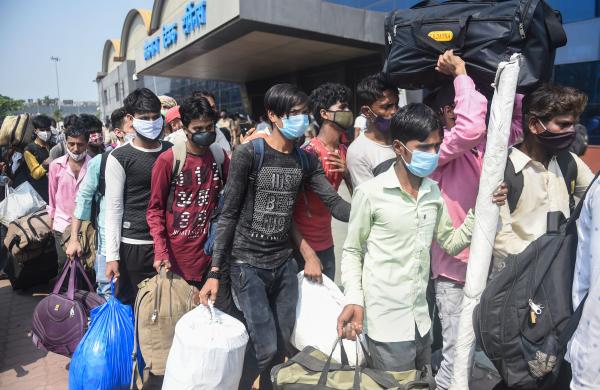 By ANI
NEW DELHI: Amidst the spike in coronavirus cases, people at Delhi’s Anand Vihar bus station were seen returning to their native places as they were fearing that the government may announce another lockdown soon like last year.

Speaking to ANI, Subhash, a passenger who is a migrant worker and going to Hardoi said: “Lockdown is going to get imposed. So we are going back home, everyone is saying that lockdown is going to happen even our neighbours are saying so. I will start doing any work in Hardoi.”

He further said last year, when the lockdown was imposed he had to go back by walking. “We thought that if it happens again it would be better to leave early otherwise the situation will be the same,” he explained.

He added, “Now I am not in a mood of coming back to Delhi again.”

Another passenger, Chhedi Lal who works as a painter here said he is going back to his hometown because of Assembly elections and as a premptive measure before any other lockdown.

“Everyone is saying the same thing, I am going back to my home and will do small work over there rather than staying in Delhi,” he added.

Some alone with backpacks, while some with their families, migrant workers were seen leaving for their home at the bus stop.

In view of the rapidly rising cases, the Delhi government has imposed a night curfew in the national capital from 10 pm to 5 am on April 6 till April 30.

The city witnessed a new surge of 13,468 COVID-19 cases — the highest single-day spike so far — and 81 deaths were reported in Delhi in the last 24 hours.

According to the health department bulletin released on Tuesday evening, the total number of active cases in the city has gone up to 43,510.

Yesterday, Maharashtra government also announced a series of strict restrictions in the state till May 1 including the imposition of Section 144 from Wednesday in view of rising COVID-19 cases.