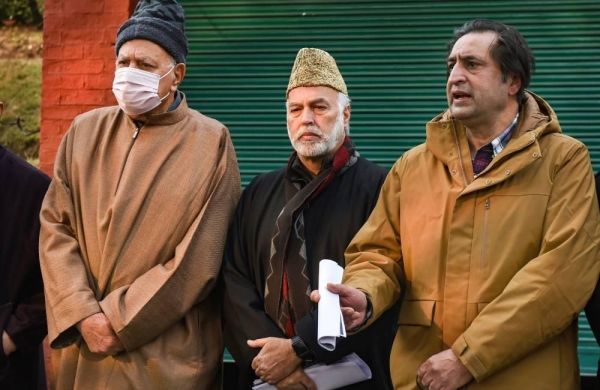 Express News Service
SRI NAGAR: It has been over a month since the District Development Council (DDC) election results came out, but the Gupkar Alliance, which emerged as the single largest group post polls, is yet to convene a meeting to chart a roadmap for its declared goal of restoring Articles 370 and 35A. This lack of progress, combined with the People’s Conference allegations that National Conference fielded proxy candidates, indicates that fault lines have already appeared in the seven-party alliance.

The constituents – NC, PDP, Peoples Conference, ANC, CPM, CPI and JKPM – are yet to meet on charting declare ‘referendum’ on Article 370 restoration. The first ever DDC polls for 280 seats concluded on December 19, and the Gupkar Alliance had emerged as a single-largest group with 110 seats. Ever since then, only Mehbooba Mufti’s voice has been heard, with other leaders lying low. Be it government policies, eviction of people from forest areas or demanding inquiry into Lawaypora encounter, Mufti has been in the forefront, missing no opportunity to criticise the government.

The DDC polls had brought the internal bickering in the Alliance to the fore with the parties accusing each other of fielding proxy candidates. Many leaders had rebelled against the constituents, and had contested against the PAGD candidates. Influential Shia leader and Peoples Conference general Secretary Imran Reza Ansari in a letter to party president Sajjad Gani Lone accused the National Conference of fielding proxy candidates in Pattan, Sonawari and Kupwara Assembly constituencies in north Kashmir. He said that when he met Lt Governor Manoj Sinha, he was served a notice, but the Alliance was mum when NC delegations and CPM leader Mohammad Yousuf Tarigami called on Sinha.

Senior PDP leader and Rajya Sabha MP Fayaz Mir also accused the NC of fielding proxy candidates against the PAGD nominees in Kupwara district. He said the Gupkar Alliance leadership should have taken action against seat-sharing formula violators, but no action was taken.

PDP accuses NC of violating agreementSenior PDP leader Fayaz Mir accused the NC of fielding proxy candidates against the PAGD nominees in Kupwara. He said the leadership should have taken action against the violators