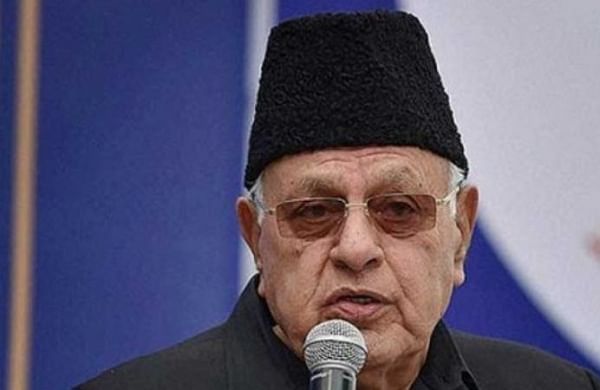 NEW DELHI: National Conference president Farooq Abdullah on Monday condoled the death of two policemen in a terror attack in Srinagar and asked the government to hold talks with Pakistan to find a way to bring peace in the region.

He said both India and Pakistan should “shed their egos” and come forward for dialogue.

He also asked the Centre to “win the hearts” of the people of Jammu and Kashmir to put an end to terrorism in the Valley.

Two policemen were killed and 12 others injured as terrorists opened fire on a bus carrying Jammu and Kashmir Armed Police personnel on the outskirts of Srinagar on Monday, the 20th anniversary of the Parliament Attack, according to officials.

The bus carrying 25 police personnel was attacked in Zewan in Pantha Chowk area.

“It’s an unfortunate incident. First of all, I pay tributes to the martyrs and tell the government that to end such things, they should talk about winning hearts. If the government of India doesn’t win hearts and remove the distance from Delhi, these things will continue,” Abdullah told reporters on the sidelines of the launch of a book titled “Furrows in a Field: The Unexplored Life of H D Deve Gowda”.

It is necessary to control such incidents, he added.

Responding to reporters’ questions, the NC president said “both India and Pakistan should shed their egos and come forward for talks” to resolve issues.

“I will keep saying that India should hold talks with Pakistan, no matter how much you criticise (me). Deve Gowda had also tried (when he was the prime minister). Atal Bihari Vajpayee had also tried, he was not a fool,” he said.

Abdullah said an atmosphere can be created if efforts are made in this direction by the government.

“If you think that we will hold a dialogue when the last bullet stops, it will be too late….both countries need to shed their egos and find a way out so that people are saved and progress takes place,” he said.

He asked, “If you (Centre) can hold talks with China, which killed (our) 22 soldiers and is sitting on our land (territory), why can’t you hold talks with Pakistan? Why don’t you go to war with them (China)?” According to police, two to three terrorists were involved in Monday’s attack and they managed to escape from the spot taking advantage of darkness.

The area has been cordoned off and a search operation launched to track down the assailants, the officials said.