Farmers to sit for ninth round of talks on Friday; unions say don’t have much expectations from Modi government 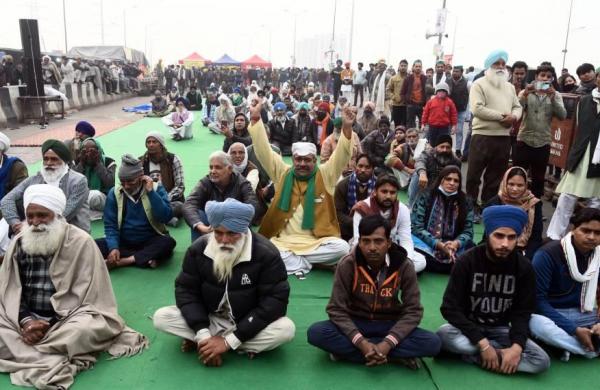 Express News Service
CHANDIGARH: The Centre as well as the protesting farmer unions on Thursday said the ninth round of talks over the contentious farm laws will take place as scheduled.

“We are hopeful of a positive discussion at the ninth round of talks with farmer unions on Friday,” Agriculture Minister Narendra Singh Tomar said, reiterating that the Centre was ready to talk to the farmers with an open mind.

Doubts over the continuation of the dialogue emerged after farmer unions dismissed the Supreme Court-appointed four-member panel to end the stalemate. However, the unions have confirmed they will not pull out from the talks.

“Let’s see what happens at the meeting. But our meetings with the government will continue till our protest ends,” Bharatiya Kisan Union (BKU) leader Rakesh Tikait said.

The farmer union leaders also appealed to all protesters to maintain peace and harmony during the tractor parade on Republic Day. BKU (Rajewal) leader Balbir Singh Rajewal said the details of the tractor parade in Delhi will be finalised next week after the talks with the government.

In an open letter written in Punjabi to all farmers, Rajewal condemned rumours saying the farmers will march to Rajpath and hoist the national flag at Red Fort. Urging everyone not to fall for such rumours, he asked people to participate in large numbers.

The BKU leader also appealed to farmers to act as volunteers and keep an eye on anyone trying to defame the struggle saying “we can win only through peaceful means”.

Bhartiya Kisan Union (Ekta Ugrahan) Joginder Singh Ugrahan told PTI, “We are going to hold talks with the government tomorrow. We don’t have much hope from the Friday meeting as the government will cite the SC-appointed panel. The government doesn’t have good intention to resolve our issues.”

Singh said that the unions do not want any committee, adding “we just want a complete repeal of three farm laws and legal guarantee on minimum support price for our crops.”

He said that farmers will not call off their protest until their demands are met.

Another farmer leader, Abhimanyu Kohar, said that government knows that the court cannot repeal the laws and added that the Centre should stop playing with the sentiments of farmers who have been camping at several Delhi borders since November 28.

He said that forming a committee is not a solution, adding that the new farm laws have been enacted by Parliament and the court cannot do much.

Darshan Pal, president of Krantikari Kisan Union, said, “We will be entering Delhi on January 26 and for that we will be finalising our strategy soon. How many of us will enter from where and how is still to be decided. But our march will be totally peaceful.”

Meanwhile, more than 800 women farmers and university students have written an open letter to Chief Justice of India S A Bobde expressing shock and dismay at the comments made in the Supreme Court “undermining” the participation of women farmers in the agitation.

“One of the important points of concern is the paternalism and patriarchy reflected in observations with regard to women farmers. We urge the respected institution of the Supreme Court to recognise and appreciate the agency of women in this matter,” Kavitha Krunganthi of All India Kisan Sangarsh Coordination Committee said.

Amandeep, National Council Member, Youth for Swaraj, said women were the heart and soul of the agitation and undermining their role was disgraceful.

In an interview to PTI, Anil Ghanwat, a member of the SC-appointed committee, said that the panel will have no “ego or prestige issue” if it has to go to farmers’ protest sites to talk to them.

On the government holding parallel talks with protesting farmers, scheduled for January 15, after the SC appointed the panel, Ghanwat said, “I think this will be their last meeting with the government. They will say henceforth you (farmers) have to sit with the committee, which will give a report to the Supreme Court.”

Asked about protesting farmers’ unwillingness to take part in the committee proceedings, he said, “We will go before them. We are their brothers. We have worked together in the past. We will reach out to them, sit with them and discuss the issue. There is no problem.”

The farmer unions have been maintaining that they were ready to attend the scheduled talks with the government, even as they have said they do not want to appear before the court-appointed panel and have also questioned its composition.

Earlier in the day, Bhartiya Kisan Union president Bhupinder Singh Mann said he is recusing himself from the four-member committee.

Farmer unions and opposition parties had called it a “pro-government” panel, insisting that its members have been in favour of the three laws in the past.

Thousands of farmers, mostly from Punjab and Haryana, have been camping at several Delhi border points, demanding a complete repeal of the three farm laws and legal guarantee of minimum support price for their crops.

Tikait on Thursday said the protesting farmer unions will attend the scheduled ninth round of talks with the government and asserted it is necessary to continue the dialogue to resolve the deadlock and end the agitation.

While the previous eight rounds of negotiations have failed to end the protests continuing for several weeks on various borders of the national capital, Agriculture Minister Narendra Singh Tomar said earlier in the day that the government is hopeful of positive discussions at Friday’s scheduled meeting.

Tikait also said the protesting unions will attend the meeting with union ministers on Friday.

Asked if unions have any hope from the Friday meeting, Tikait told PTI: “Let’s see what happens tomorrow. But, our meetings will continue with the government till our protest ends as it is necessary.”

“We will not oppose the meetings with the government,” the BKU leader said when asked whether the Friday talks could be the last one if there is no solution.

Tomar had said, “The government is ready to hold talks with farmers’ leaders with an open mind.”

Clearing the confusion over the fate of the ninth round of talks, which was the only outcome in the last meeting on January 8, in the wake of the Supreme Court on January 11 appointing a four-member panel to resolve the impasse and a key member of the proposed committee subsequently recusing himself, the union leader said the talks between the government and the union representatives will take place as scheduled for 12 pm on January 15.

Don’t believe in rumours being spread to defame stir: BKU leader to farmers

BKU leader Balbir Singh Rajewal on Thursday wrote an open letter to farmers, urging them not believe in rumours being spread to defame their agitation against the Centre’s farm laws.

The BKU (Rajewal) president said rumours are being spread about the farmers’ proposed tractor parade on January 26.

It is being spread as if farmers will head towards the Red Fort or Parliament on January 26, Rajewal wrote in Punjabi cautioning farmers not to believe in such rumours.

He apprehended that some “anti-farmer forces” are desperately trying to “fail” their peaceful agitation.

He stressed that the farmers’ ongoing protest will remain peaceful.

Rajewal said the outline of the ‘Kisan parade’ will be announced next week.

Farmers had proposed to take out a tractor parade on the Republic Day if their demands were not accepted by the Centre.

Rajewal noted that an agitation will only be successful if it is completely peaceful.

Rajewal said the ongoing agitation is not limited to farmers only and was receiving support of every section of society as they understand “adverse implications” of these laws.

It has turned into a “jan andolan” and has spread to Haryana, Uttar Pradesh, Uttarakhand, Rajasthan, Madhya Pradesh, Maharashtra and other states after having started from Punjab, claimed Rajewal in the letter.

Azad Hind Kisan Diwas will be observed on January 23 on the birth anniversary of Netaji Subhas Chandra Bose, he said.