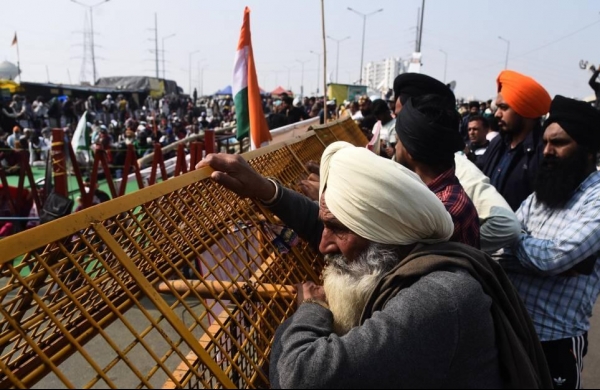 By PTI
NEW DELHI: Intensifying their agitation against the three farm laws, the Samyukt Kisan Morcha on Wednesday met with different mass organisations to strategise for their ‘Sampurna Bharat Bandh’ on March 26.

Addressing a press conference, Ranjit Raju of Ganganagar Kisan Samiti said that during the nationwide strike on March 26, which also marks four months of the farmers’ movement, all shops and other business establishments will remain shut for 12 hours.

On March 28, the protestors will burn copies of the three laws during ‘holika dehan’, he added.

“The strike will start from 6 in the morning and will continue till 6 in the evening, during which all shops and dairies and everything will remain closed.”

“We will burn the copies of the three laws during Holi and hope that better sense prevails in the government, and it repeals the laws, and gives us a written guarantee for MSP,” Raju said.

“We are also trying to create such meetings at the state-level so that the strike is observed everywhere,” said another farmer leader Purushottam Sharma.

All India Kisan Sabha (AIKS) leader Krishna Prasad said the fact that the movement had managed to continue for as long as 112 days was an achievement in itself, and it would only get stronger.

He added that the Bharat Bandh will be held at “state, zila, tehsil and village levels”.

“The protest has been going on for 112 days. That itself is an achievement. Neither you, nor us had thought that we could do this, and the public has shown that it supports us,” he said.

Prasad also expressed concerns over the central government’s move to introduce the Electricity Amendment Bill 2021, claiming that any amendments made to the act would be in violation of the commitment made by the government to the farmers in January.

“During the 11 rounds of talks that we have had with the government, Agriculture Minister Narendra Tomar said that they accepted our demands over the electricity bill.

“The media wrote that 50 per cent of the demands of the farmers’ movement were resolved. But, now they are trying to introduce the act again. This is cheating,” he said.

An SKM statement said that several organisations had also committed to mobilising thousands of people at the protest sites at a time when the protesting farmers would have to attend to wheat harvesting operations in a couple of weeks’ time.

The leaders also announced their plans to organise a “Shaheed Yadgar Kisan Mazdoor Padyatra” between March 18 and 23.

“Preparations are underway for the people from Haryana, Uttar Pradesh and Punjab to join the Shaheed Diwas events marking the martyrdom of Bhagat Singh, Rajguru and Sukhdev on March 23,” the statement said.

One ‘padayatra’ will start on March 18 from Lal Sadak Hansi in Hisar in Haryana and will reach Tikri Border, another will start from Khatkar Kalan village in Punjab and pass through Panipat before reaching Singhu Border, and the third padayatra will begin in Mathura and will be headed towards Palwal.

Enacted in September, the three farm laws have been projected by the Centre as major reforms in the agriculture sector that will remove the middlemen and allow farmers to sell their produce anywhere in the country.

The protesting farmers, on the other hand, have expressed apprehension that the new laws would pave the way for eliminating the safety cushion of the Minimum Support Price (MSP) and do away with the “mandi” (wholesale market) system, leaving them at the mercy of big corporates.