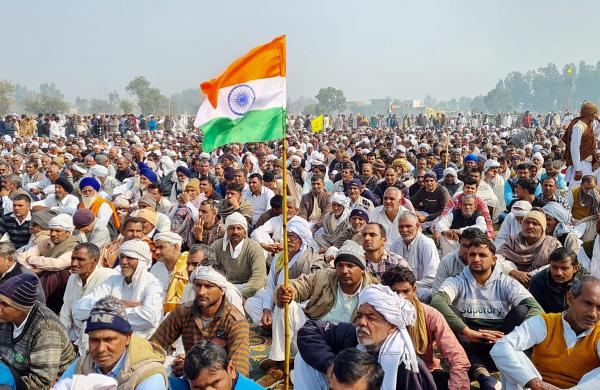 By ANI
JIND (HARYANA): A large gathering of farmers on Wednesday was seen assembling at Kandela village sports stadium to participate in the “kisan mahapanchayat” that is underway in Haryana’s Jind.

The “kisan mahapanchayat” has been organised by the Haryana khap where Bharatiya Kisan Union (Arajnaitik) leader Rakesh Tikait and several other leaders of various farmer unions are slated to address the gathering.

Speaking about the event, Ram Mehar, the son of Gram Pradhan told ANI, “This is the first “Kisan mahapanchayat” in Haryana. The further direction of the farmers’ movement, next course of action and other related decisions shall be taken in the presence of the heads of various Khap Panchayats. Khaps from across Haryana, Uttar Pradesh, Rajasthan, Delhi, and Jatthedars from Punjab have are scheduled to participate.”

Talking to ANI at the event, village pradhan Tekram demanded the immediate repeal of the three new laws, enactment of a law guaranteeing minimum support price (MSP), and implementation of the Swaminathan report.

“The three new laws should be immediately taken back, a law guaranteeing minimum support price (MSP) should be enacted and Swaminathan report should be implemented in a full-fledged manner,” said the village pradhan.

He further stated, “In view of the poor financial condition of the farmers, the government should wave off farmers’ loans and our 200 to 300 men who have been detained should be released with immediate effect.”

He also requested Prime Minister Narendra Modi to personally hold talks with the farmer union leaders and resolve the issue as soon as possible.

Earlier today, Rakesh Tikait has said that his main aim behind conducting panchayats is to visit villages and gather their support. Such panchayats will be held across the country until the government accepts their demands, Tikait has said on Wednesday.

Tikait had also stated that if the government does not fulfill their demands, they will organise a gathering of 40 lakh tractors and take out ‘yatras’ across the country to protest against the government over the recently enacted farm laws.

Meanwhile, security has been beefed up at Delhi’s Ghazipur, Singhu and Tikri borders in view of the farmers’ stir.

Farmers have been protesting on the different borders of the national capital since November 26 against the three newly enacted farm laws: Farmers’ Produce Trade and Commerce (Promotion and Facilitation) Act, 2020; the Farmers Empowerment and Protection) Agreement on Price Assurance and Farm Services Act 2020 and the Essential Commodities (Amendment) Act, 2020.