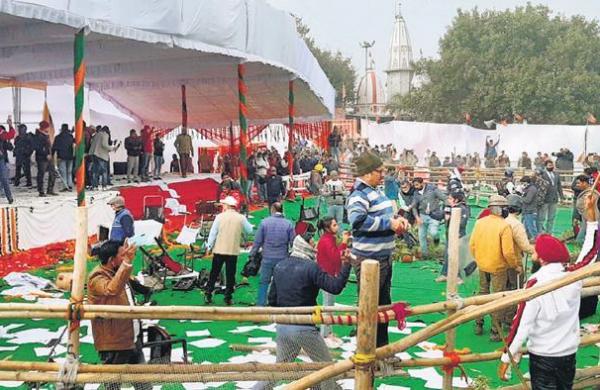 The administration had anticipated trouble as farmers belonging to the Bharatiya Kisan Union (Charuni) had on Wednesday last said they would not allow the event to take place. Yet, the intensity of the protest as the farmers broke through two levels of barricades on the road leading to the village and kept moving ahead despite the police firing tear gas shells and using water cannons, left the administration overwhelmed. Upon reaching the venue, the farmers vandalised the stage and broke chairs, tables and flower pots, while the police was a mere spectator.

The protesters also took control of a makeshift helipad where Khattar’s helicopter was to land. While most of them squatted on it, some others damaged the helipad, forcing Khattar to call off the trip. The farmers held black flags and shouted slogans against the BJP-led government as they pushed towards the venue. Karnal’s Superintendent of Police Ganga Ram Punia tried to pacify the farmers but to no avail. The protestors initially staged a sit-in near the second barricade before breaking it.

The police claimed it had made elaborate security arrangements, but the situation went out of control as farmers were adamant on not allowing Khattar to address the event. Later, Khattar blamed the Congress and the communists for the vandalism. “These people have defamed the farmers. I am an elected representative. We have never stopped anybody from expressing their views. But violation of constitutional provisions is not right,’’ he said, adding the Centre will not repeal the laws but was open to introducing amendments.