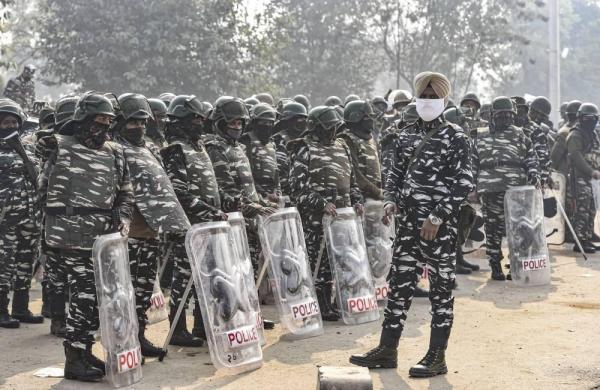 By Agencies
NEW DELHI: Delhi’s border points at Tikri and Singhu remained under heavy police deployment on Friday in the aftermath of the violence that broke out during a tractor parade by farmers in the national capital on Republic Day, officials said.

Personnel of the Delhi Police, along with those of the paramilitary forces, have been deployed at the borders.

Several roads have been closed and the traffic police has asked the commuters to take other routes.

There was a traffic snarl on National Highway 24 on Thursday evening following the closure of the Ghazipur border.

Hundreds of Bharatiya Kisan Union (BKU) members stayed put on the Delhi-Meerut Expressway on Friday, notwithstanding the Ghaziabad administration’s ultimatum to vacate the UP Gate protest site.

A confrontation was building up at the UP Gate in Ghazipur even as frequent power cuts were witnessed on Thursday evening at the protest site, where BKU members, led by Rakesh Tikait, are staying put since November 28 last year.

Ghaziabad District Magistrate Ajay Shankar Pandey and Senior Superintendent of Police Kalanidhi Naithani visited the protest site post midnight for a review of the situation even as hundreds of security personnel in anti-riot gears were deployed there since Thursday.

The tractor parade on Tuesday that was to highlight the demand of the protesting farmer unions for a repeal of three new agriculture laws turned violent as the protesters deviated from the pre-designated routes, attacked police personnel, overturned vehicles and hoisted a religious flag on the ramparts of the iconic Red Fort.

The police issued lookout notices against farmer leaders on Thursday and announced a probe into the “conspiracy” behind the Republic Day violence.

The police have so far registered 33 FIRs in connection with the violence and issued lookout notices against 44 people, including most of the farmer leaders.

Meanwhile, Actor-turned-activist Deep Sidhu, who has been booked in connection with the religious flag incident at Red Fort, has said he needs some time to bring out the truth and then will join the investigation.

The 36-year-old Sidhu is in the eye of a storm for being among the protesters who put up a religious flag atop the Red Fort on Republic Day.

He said he needed some time to bring out the truth.

“Because whatever has been spread, it is false information and it is misleading the public at large. Therefore, I need a couple of days to bring out the truth and then I will join the investigation,” said Sidhu.

He told the investigation agencies and the police department that he will come to them in two days.

“The kind of rumours being spread is not based on facts. I need two days to bring out the truth based on the facts and I will collect all the evidence and proof,” he stated.

The Delhi Police had named actor Deep Sidhu in an FIR lodged in connection with the Red Fort incident.

Sidhu was present at the Red Fort when a religious flag and a farmer flag were put at the flagpole at the historic monument, triggering massive outrage.

Sidhu had been accused by farm bodies of trying to defame their agitation and termed a “traitor”.

On Thursday, he had hit out at farm leaders for allegedly spreading false propaganda and hatred against him.

On January 26, Sidhu, hailing from Punjab’s Muktsar district, had sought to defend the action of protesters at the Red Fort, saying they did not remove the national flag and had put up the ‘Nishan Sahib’ as a symbolic protest.

Sidhu was also a close aide of BJP MP Sunny Deol, who contested from the Gurdaspur seat in Punjab during the 2019 Lok Sabha elections.

He remained with Deol during the poll campaigning.

Deol had distanced himself from Sidhu in December last year after he joined the farmers’ agitation.

The cops has also arrested a man who had allegedly snatched a wireless set from a constable during the tractor parade, officials said on Friday.

According to the police, the accused was previously involved in three cases lodged in the national capital in 2019.

Deputy Commissioner of Police (outer) A Koan said, “We have arrested the accused who snatched a wireless set from Constable Sonu at Nangloi on Republic Day. The wireless set has been recovered from his possession.”

The Special Cell was investigating the conspiracy and criminal designs behind these unfortunate events that occurred on Republic Day.

“A criminal case has been registered and is being investigated under provisions of the Unlawful Activities (Prevention) Act (UAPA) and sections of IPC dealing with sedition. The role and conduct of organisations and individuals based in India, as well as those out of the country, is being probed. The investigation is in progress and further details will be communicated in due course,” said Delhi Police Special Cell.

The Special Cell has also lodged an FIR under UAPA and sections of IPC dealing with sedition to investigate the violence at Red Fort in Delhi on January 26.

A preliminary assessment suggests there was a pre-conceived and a well-coordinated plan to break the agreement reached between Delhi Police and the leaders of farmers organisations, to indulge in a violent confrontation with the security forces, to breach the sanctity of iconic and historical structures/monuments and to create an international embarrassment for the government on the occasion of the Republic Day, according to the Police.

While urging the people protesting against the farm laws to remain peaceful, Bharatiya Kisan Union (BKU) spokesperson Rakesh Tikait on Friday said that farmers’ leaders will talk to the central government about their issues.

However, farmers continue their protest there.

ALSO READ | Farmers’ stir comes to an end in UP’s Baghpat; protesters allege use of force by police

“We will not vacate the spot. We will talk to the Government of India about our issues. I urge the people to remain peaceful. Our talks with the government are going on,” Tikait told ANI.

Earlier, Delhi Police had issued a notice to Tikait asking him to explain as to why legal action should not be taken against him for breaching the agreement with police regarding the tractor rally on January 26 in which 394 police personnel were injured and several public properties were damaged.

(With PTI and ANI Inputs)