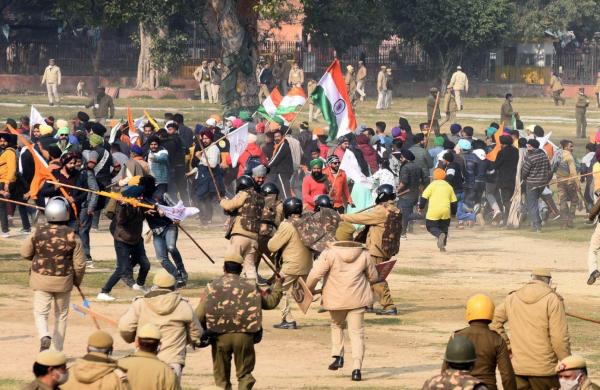 By PTI
INDORE: BJP’s Madhya Pradesh in-charge P Murlidhar Rao on Sunday suspected a “political conspiracy” behind the violence that broke out in Delhi during the farmers’ tractor rally last week.

Thousands of protesting cultivators had clashed with the police on January 26 during the tractor rally called by farmers’ unions to highlight their demand for repeal of the Centre’s three new farm laws.

Many protesters reached the Red Fort and entered the monument.

Some even hoisted religious flags on its domes and the flagstaff at the ramparts, where the national flag is unfurled by the prime minister on Independence Day.

Talking to reporters here, Rao said, “Gangsters and history-sheeters from Punjab were involved in rioting at the Red Fort on the Republic Day. Their videos are coming to light.”

“In the federal structure, law and order is a state subject, but the Punjab government is not taking the January 26 incidents seriously. A thought strikes the mind after a serious consideration whether there was some political conspiracy behind the entire incident?” he added.

The BJP leader said that the Congress government in Punjab cannot escape from the accountability over the Delhi violence.

He alleged that the Congress has lost the political values and it was conspiring and spreading confusion over the three new farm laws.

At the cost of maligning the nations image, it is trying to defeat (the Modi government), he said.

“After losing elections in a row, the opposition parties are not capable of protesting directly. In such circumstances, they are leaning on others to fire,” he said.

He also claimed that most of the farmers were with the government over the agriculture laws.

Rao was here to attend a meeting of newly-formed state executive committee.