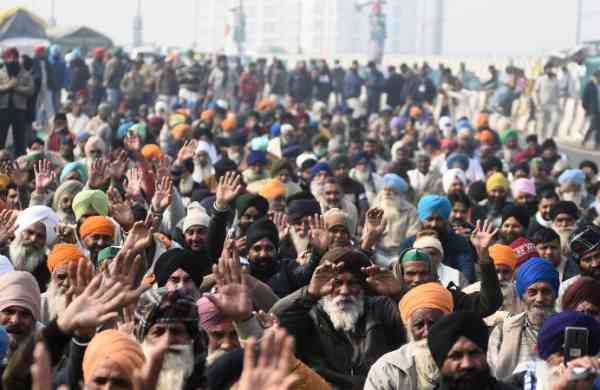 By PTI
NEW DELHI: “We don’t want anybody’s blood on our hands,” said the Supreme Court on Monday while expressing apprehension that the ongoing farmers’ protest against the new farm laws might lead to violence and loss of lives and property if it continues for long.

The apex court, which observed that the Centre has made these laws “without enough consultation”, said the most serious concern is about any sort of violence and possible loss of lives.

“Responsibility is on all of us. Any stray incident can spark violence,” said a bench headed by Chief Justice S A Bobde.

“Each one of us will be responsible if something goes wrong. We don’t want anybody’s blood on our hands,” said the bench, also comprising Justices A S Bopanna and V Ramasubramanian.

The bench said it is not going to protect any ‘law breakers’ and want to prevent any loss of lives and property.

The top court, which was hearing a batch of petitions challenging the new farm laws as well as the ones raising issues related to the ongoing agitation at Delhi borders, expressed its displeasure that the Centre has not been able to solve the problem.

“We are extremely disappointed with the negotiation process,” the bench said, adding, “You have made a law without enough consultation resulting in a strike. So you have to resolve the strike.”

During the hearing conducted through video-conferencing, the top court questioned the Centre over the consultative process adopted for these laws.

“We don’t know what consultative process you have followed before these laws. Many states are up in rebellion,” the bench said.

Observing that there is not a single petition before the apex court which says that these farm laws are beneficial, the bench told the Centre, “It will not help you to say that this was started by last government. We are discussing constitutionality.”

The apex court, while pulling up the Centre for its handling of farmers protest against the farm laws, said it will constitute a committee headed by a former Chief Justice of India to resolve the impasse.

It said that former CJI R M Lodha could be asked about whether he is willing to head the committee.

The bench told Solicitor General Tushar Mehta that he can also suggest two-three names of former CJIs who can head the court-appointed committee.

“We have talked to former CJI P Sathasivam but he refused saying he has problem in understanding Hindi,” the bench said.

Mehta told the bench that representatives of some farmer unions, who were coming for discussion with the government, used to turn their chairs back or cover their eyes and ears when the ministers sat for meeting.

The bench said, “we can’t say anything on this.”

The top court would pronounce its order on Tuesday on various issues related to the new farm laws and the farmers’ ongoing protest at Delhi borders.

Indicating amply that it may go to the extent of staying the implementation of the contentious farm laws, the apex court refused to grant extra time to the Centre to explore the possibility of amicable solution saying it has already granted the government a ‘long rope’.

The eighth round of talks between the Centre and the farmer unions on January 7 headed nowhere as the Centre ruled out repealing the contentious laws, while the farmers’ leaders said they are ready to fight till death and their ‘ghar waapsi’ will happen only after ‘law waapsi’.

The apex court had earlier issued notice and sought the Centre’s response on a batch of pleas against the three contentious farm laws — the Farmers’ (Empowerment and Protection) Agreement on Price Assurance and Farm Services Act, the Farmers’ Produce Trade and Commerce (Promotion and Facilitation) Act, and the Essential Commodities (Amendment) Act.