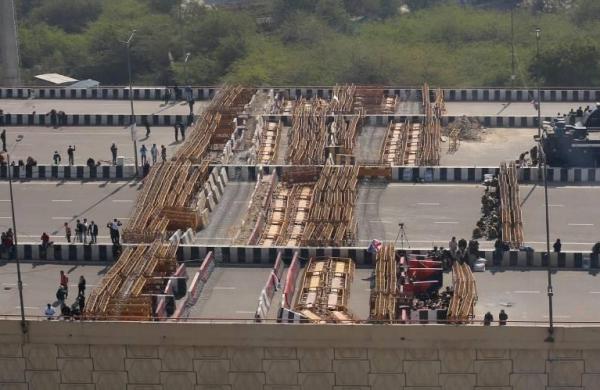 Police officers were seen standing in huge numbers near the barricades placed near the Tikri border a day after the “chakka jam” call given by the farmer unions who were protesting against the farm laws for over two months at the national capital’s border.

“The government should consider the fact that protesting farmers are dying and these laws should be repealed so that we can go back home. We have been protesting for nearly three months and till these laws are not withdrawn we’ll keep protesting here peacefully,” said Chanranjeet Singh, a farmer from Punjab.

Speaking to ANI, Kuldeep Singh Danda, Bharatiya Kisan Union (BKU) said, “Farmers held chakka jam very peacefully. We just want to tell the government that a lot of people are standing with us and supporting our cause while we are protesting. I would like to appeal to the farmers to stay firm and we will win.”

Farmers on Monday announced a countrywide ‘chakka jam’ on February 6. Due to that heavy police personnel deployed across Delhi-NCR including Shahjahanpur (Delhi-Rajasthan) border.

Around 50,000 personnel of Delhi Police, Paramilitary, and Reserve Forces were deployed in the Delhi-NCR region to maintain the law and order situation here. At least 12 metro stations have also been put on alert, police said.