Farmers’ protest comes to an end in UP’s Baghpat; protesters allege use of force by police 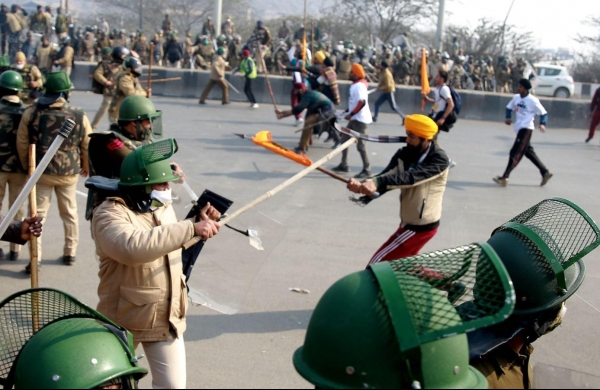 By PTI
BAGHPAT: A farmers’ protest against three farm laws of the Centre, which was continuing on a national highway in this Uttar Pradesh district since December 19 last year, has come to an end with the protesters alleging use of force by police.

The police, however, claimed that the matter was resolved through deliberations and the protesting farmers were sent home on Wednesday night.

The protesters have alleged that police personnel entered their tents late on Wednesday night, used force on the sleeping farmers and chased them away.

Thamba Chaudhary, Brijpal Singh, Baljaur Singh Arya, Vikram Singh and other farmers who took part in the protest on Thursday said their agitation against the farm laws was going on on one side of the national highway.

Late on Wednesday night, a large number of police personnel entered their tents, resorted to lathicharge on the sleeping farmers and chased them away, they told reporters.

Charging the police with adopting repressive measures, they claimed that their tents were uprooted.

About 40 farmers were present at the spot at that time, they said.

Refuting the charges, Circle Officer Alok Singh said the protest ended after deliberations with the farmers and the police did not resort to lathicharge on the protesters.

Whatever happened was in agreement with those present there, he said, adding that the protesting farmers returned home peacefully.

Meanwhile, ADM Amit Kumar Singh said the Project Director of the National Highways Authority of India (NHAI), Sanjay Misra, had written a letter complaining that work on the Delhi-Saharanpur highway was being hampered because of some anarchic elements.

Acting on the letter, the protesters were removed from the national highway and sent home, the ADM said.

The protest was launched on the national highway at Badaut on December 19 last year.