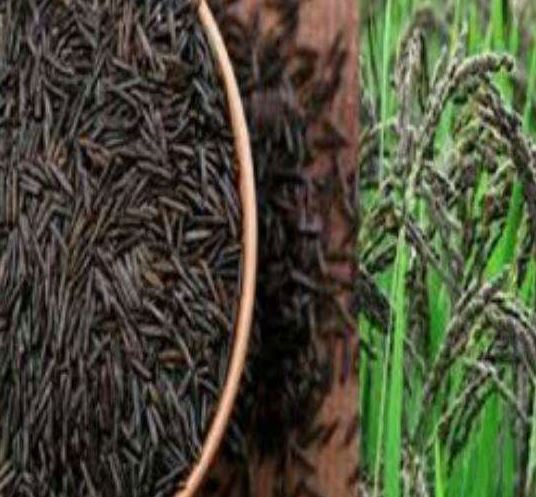 We often see and eat rice in white color. Do not be surprised if black colored rice is found somewhere. Now farmers in Dhamtari district are also growing it. This rice which is prepared with organic properties, having medicinal properties, was first brought to Assam by excellent farmer Shri Gajendra Chandrakar of Parswani of Dhamtari district and spread its seeds throughout the state. For the first time in the year 2017-18, under the Atma Yojana, an exhibition of Black Rice was organized in 15 acres under the Kudu. It is worth mentioning that in the year 2018-19, besides the medicinal quality Black Rice (Krishnam) in the district, exhibitions were held in the fields of farmers under the spirit scheme of Mahajink, Madhuraj 55 and Lohandi. On one hand, these crops were planted as a demonstration of black rice in an area of ​​70 acres. On the other hand, in 35 acres of land, Madhuraj 55, Mahajink in 27 acres and in 8 acres of Lohindi (Zinc) exhibition was held in the farmers’ fields. The farmers brought the finished product to national and state level exhibitions and gave it a new identity.
After this, in the International Buyer-seller Farmers’ Conference held in the capital Raipur in 2019 under the able leadership of the Chief Minister of the state, Mr. Bhupesh Baghel, Ojaswi Farmers Growers Organization and farmers Shri Ramlal Bhatpahri and Shri Thanendra Sahu organized 110 quintal black rice conference I contracted with the exporter. The rate of black rice per kg was fixed at Rs 100. Taking this connection further, in the year 2019-20, 30 acres of black rice crop was planted as an agricultural demonstration under the Atma Yojana. A private company from Gurgaon purchased black rice at the rate of seven thousand rupees per quintal from the farmers of the district. Recently a program of dividend distribution was organized in Hatbandh, where the farmers of the young farmer interest group, who are cultivating black rice, received dividends for the rice they sold. He was given a dividend of one thousand rupees per quintal by a private company. Actually, the plan of the said company is that the farmers will be given a dividend of 33 percent of the rice sold by them if there is a profit. Under this, the farmers of the group Mr. Thanendra Sahu, Mr. Kejuram Dewangan, Mr. Lokesh Sahu, Mr. Harish Sahu and Mr. Rajesh Dote received a total dividend of thirty thousand rupees.
Shri Kejuram Dewangan, a resident of Hatabandh, a farmer of the interest group of young farmers, says that farmers sell paddy at a support price in a state called rice bowl If it starts growing black rice farmers with medicinal properties, then they are likely to get three times more profit. He has called upon the farmers to increase their income by cultivating black rice prepared by organic method. At the same time, farmer Harish Sahu expresses happiness that this crop prepared by the organic method increases the income, at the same time, the environment can be saved from being polluted by organic farming. By providing black rice with medicinal properties to consumers, they also get a different kind of soul satisfaction.