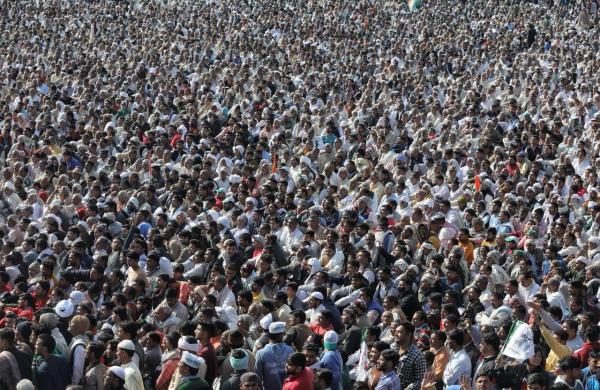 Express News Service
LUCKNOW: Despite the denial of permission to hold a Mahapanchayat, thousands of farmers on Friday converged in the Shamli district of western UP to be a part of the planned event against the three newly-enacted farm laws.

The congregation took place at Swami Kalyan Dev Kanya Gurukul at Bhainswal village. As songs of protests were blaring out of mics, one of them implored Prime Minister Narendra Modi to listen to the voice of farmers. The event was organised by the Rashtriya Lok Dal (RLD) and Samajwadi Party (SP).

The district administration in Shamli had cited a Covid-spurred restriction on large gatherings until April and reports of possible unruly behaviour, vandalism and violence by the farmers while denying permission. However, the organisers remained adamant and went ahead with their initial plans.

Addressing the crowd, RLD vice president and Mahapanchayat chief guest Jayant Chaudhury trained the gun at the Centre and accused the ruling party of hatching the conspiracy of Republic Day violence on the roads of Delhi.

“The Delhi Police chose to remain a mute spectator to the acts of vandalism by the rowdy elements on January 26 in Delhi,” said Chaudhury, while exhorting the farmers to vote against the BJP in the next elections if it failed to address the issues plaguing the farmers.

Rakesh Tikait, the national spokesman of Bharatiya Kisan Union (BKU), opted to remain away from the Mahapanchayat saying his outfit had nothing to do with the Shamli meet. But his brother Narendra Tikait attended it in his personal capacity.

Jayant Chaudhury also accused the Central government of treading the path of rigidity and arrogance. He advised the Modi government not to make it an issue of prestige and repeal the laws keeping the farmers’ sentiment in mind.

With an eye on 2022 UP Assembly elections, Chaudhury used the occasion to strike a political chord with the gathering saying that in the House, the representatives of farmers had become lesser in number. “More farmer representatives will have to be sent to the Assembly and for this more farmer leaders would have to be voted for,” he said.

Chaudhury, in fact, considers his party (RLD) as the messiah of farmers in western UP. However, in the last 2017 assembly elections, the RLD could win just one seat of 131 it had contested getting just 1.8% votes.

Ironically, the lone RLD MLA Sahendra Singh Chauhan Ramala, who had won from Chhaprauli in Bhaghpat, the bastion of Chaudhurys, also joined the ruling BJP in 2018. At present, RLD has no presence in UP Assembly.

There was a huge deployment of the police force at the Mahapanchayat. SP Sukirti Madhav said the heavy bandobust was done to avert any untoward incident.  Besides several columns of PAC, senior police officials of the division and the district were present on the site.

Groups of farmers defiantly headed to Shamli on Friday morning and many were seen driving towards the grounds on their tractors with chants of ‘Inquilab Zindabad’.·