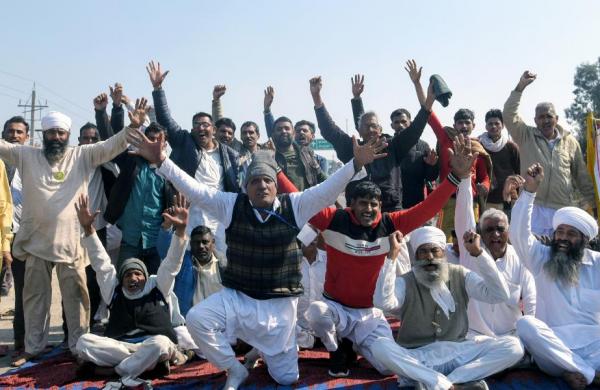 By PTI
NEW DELHI/ CHANDIGARH: Farmers in Punjab, Haryana and Rajasthan blocked highways with tractor-trolleys and squatted on key roads on Saturday, while scattered protests were held in other states during a three-hour ‘chakka jam’ called by agitating farmer unions which are demanding scrapping of the Centre’s new agri laws.

Farmer leader Rakesh Tikait declared that their protest on Delhi’s outskirts will continue till October 2 and farmers will return home only after the government repeals the contentious legislations and makes a law ensuring legal guarantee for the minimum support price (MSP). “There will be no compromise on this,” he said and asserted that the agitation was for the whole country and not one state.

No untoward incident was reported in any part of the country during Saturday’s protests though scores of people were detained in several states, including 50 at Shaheedi Park in the national capital which was brought under a thick security blanket in light of the violence during the farmers’ tractor parade on January 26.

Protesters were also held briefly by police as they stalled traffic in parts of Maharashtra, Telangana, Tamil Nadu and Karnataka. The Congress and Left parties too joined the protests in some states in support of the ‘chakka jam’ called by the agitating farmer unions.

While Delhi along with Uttar Pradesh and Uttarakhand was kept out of Saturday’s road blockade from 12 noon till 3 PM by agitating farmer unions, authorities suspended internet at the protest sites of Singhu, Ghazipur and Tikri as well as adjoining areas for 24 hours till Saturday night and closed entry and exit facilities at 10 prominent Delhi Metro stations for few hours.

Singhu border looked crowded than before as more tractors and farmers made their way to the protest sites, while drone cameras, multilayered barricades, nail-studded roads and barbed wires were in place as part of precautionary measures by the police.

Security forces, including anti-riot police, were deployed at important junctions across the national capital, including Red Fort and ITO, which had witnessed violence on January 26. Officials said that the police also monitored content on social media.

At the Ghazipur protest site, Tikait, the 51-year-old Bharatiya Kisan Union leader, said, “This movement will continue for a year. It’s an open offer and proposal to the government. A law on MSP will have to be made. Without that, we won’t go back home. Three laws will have to be taken back. Both these demands have to be met and there will not be any compromise on that. There cannot be a bigger movement. We cannot quit the protest.”

Women also took part in the stir in a sizeable number at several places. Folk songs blared from speakers and people perched atop truck-tractors hoisted the tricolour on the KMP Expressway. Biscuits and fruits were distributed to the protesting farmers sitting on the road.

Those coming to the stretch with their vehicles were politely informed about the protest and requested to turn back. “We don’t want to create any inconvenience for the people. That is precisely the reason why the call given was for three hours only. Security forces have been blocking — our and their passage — for so many days, we expect the ‘aam aadmi’ to co-operate with us for some hours at least,” said Ajit Ahluwalia (29) from Haryana’s Hisar.

In Rajasthan, police said that farmers at many places including Ganganagar, Hanumangarh, Dholpur and Jhalawar stalled traffic on the highways and main roads and held demonstrations. Farmers in Uttar Pradesh handed over a memorandum to respective district authorities, demanding the withdrawal of the laws.

Several farmer groups and the Congress held a protest in Mumbai. ‘Rasta roko’ protests were held in Karad and Kolhapur cities in Maharashtra.

At least 40 protesters, including senior Congress leader Prithviraj Chavan’s wife Satvasheela Chavan, were detained for holding a protest on a busy road at Kolhapur Naka in Karad in western Maharashtra this afternoon, a police official said.

Swabhimani Shetkari Sanghatna leader Raju Shetti and others were detained briefly in Kolhapur. In Telangana, police said several people were taken into preventive custody as leaders of opposition parties joined the farmers in ‘raasta roko’ protests on various.

Farmers blocked highways in different parts of Karnataka to show their solidarity, following a call given by various farmers’ associations led by Kuruburu Shanthakumar. A few pro-Kannada organisations too came in support of the agitators.

The demonstrations were held in Bengaluru, Mysuru, Kolar, Koppal, Bagalkote, Tumakuru Davangere, Hassan, Mangaluru, Haveri, Shivamogga and Chikkaballapura and protesters courted arrest in some parts of the state.

Condemning the protests, Union Minister for Chemical and Fertilisers DV Sadananda Gowda said the Narendra Modi government has implemented the recommendations of the Swaminathan Committee report to address the agrarian distress and farmers’ suicide.

Protests were also held in Chennai and other parts of Tamil Nadu. “This is part of the pan India stir for seeking justice for farmers. This is not for political purposes or to inconvenience the general public,” President, coordination committee of Tamil Nadu All Farmers’ Association, P R Pandian told reporters.

Ahead of the nationwide ‘chakka jam’ called by the farmer unions protesting the Centre’s new agri laws, Congress leader Rahul Gandhi tweeted the peaceful ‘satyagraha’ of the ‘annadatas’ is in national interest as the farm laws are “harmful” for the country.

Party general secretary Priyanka Gandhi Vadra also slammed the government over the farmers’ issue by posting on Twitter a picture of the multi-layered barricading at one of the farmer protest sites. “Why are you scaring us with the wall of fear?” she tweeted along with the picture.

The Congress had on Friday extended support to the countrywide ‘chakka jam’, saying party workers will stand shoulder to shoulder with farmers in their protest.

The Samyukt Kisan Morcha, an umbrella body of the farmer unions protesting the three farm laws, had said on Friday that the peasants across the country will block national and state highways for three hours between 12 noon and 3 pm, barring in Delhi, Uttar Pradesh and Uttarakhand.

Tikait claimed inputs had been received regarding some “miscreants trying to disrupt peace” during the “chakka jam”. “This (protest) is for the whole country. They will try to divide us, saying it’s a movement of one state. But that it is not. It’s a pan-India movement,” he added.

Thousands of farmers have been protesting since late November at Delhi’s borders with Haryana and Uttar Pradesh demanding the rollback of the Farmers’ Produce Trade and Commerce (Promotion and Facilitation) Act, 2020, the Farmers (Empowerment and Protection) Agreement on Price Assurance and Farm Services Act, 2020 and the Essential Commodities (Amendment) Act, 2020.

The protesting farmers have expressed apprehension that these laws would pave the way for the dismantling of the minimum support price system, leaving them at the “mercy” of big corporations. However, the government has maintained that the new laws will bring farmers better opportunities and usher in new technologies in agriculture.