Farmers are selling motorcycles by selling cow dung, this is a big achievement: CM 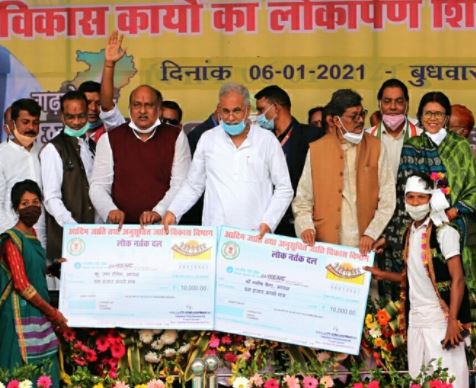 Bhupesh Baghel inaugurated 39 development works costing eight crore 54 lakhs at a function held at Danikundi in Gorela-Pendra-Marwahi district. He started off well in Chhattisgarh in his address. He announced the creation of a blood bank in Rajmergarh on the demand of the people. Also made other announcements for the district. He said that now farmers are selling pulses and taking Pulsar motorcycles. All classes are developing in the state.

Chief Minister Baghel inaugurated 25 development works costing Rs 6 crore 26 lakh and performed 14 works costing Rs 2 crore 28 lakh. In the program, under the various welfare schemes of the government, he distributed a check of material worth Rs 13.5 lakh to 337 beneficiaries and a total of 4 crore 61 lakh aid and grant amount to 230 beneficiaries.