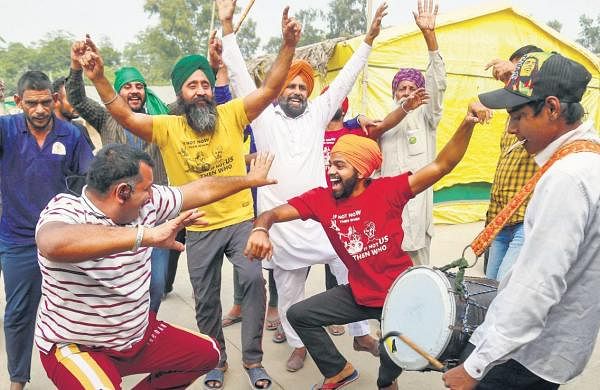 NEW DELHI: As the Union Cabinet cleared repeal of three farm laws on Wednesday, the Samyukta Kisan Morcha (SKM) said that the move of the government after year-long agitation has only averted a possible dangerous situation in future.

But the present agrarian crisis — low price, no assurance of government procurement, crop failures, and mounting debt — continues to unfold under the Modi regime, the SKM said. The SKM further said that they have appealed to Prime Minister Narendra Modi for talks to settle these issues.

“We have not heard anything from the Centre. We wrote a letter to the Prime Minister on November 21. We will wait till November 26, and meet on November 27 to decide on the future course of action,” said Hannan Mollah, general secretary, All India Kisan Mahasabha.

Mollah released a note on the Minimum Support Price (MSP) and explained why farmers are not pleased with just the repeal of three laws. He said that procurement of crops is way less than even the MSP in all agriculture markets.

“It is a well-known fact how only a very minor share of the total procurement takes place at the prevailing MSP. According to a recent situation, a survey by the government approximates the number of rural households in India to 93.1 million. For most crops, for which MSP exists, the procurement by state agencies did not amount to more than 10 per cent of the production in 2018-19.

Only 8.6 per cent of agricultural households cultivating paddy sold to a procurement agency, with the figure for wheat at a low of 4.9 per cent. This means that most farmers were forced to sell in the open market, where rates fall drastically below the prevailing MSP rate,” said the farmer organisation.

In a major climbdown, PM Modi had announced the repeal of farm laws on November 19 citing that some farmers could not be convinced about the benefits of these laws and that these will be repealed during the winter session of parliament starting November 29.

The farmer organisations have said that they would wait and watch the moves of the government but bigger demands of MSP guarantee and others remain unaddressed.