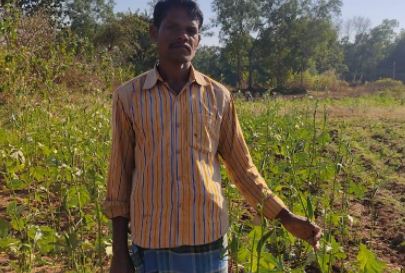 The government of Chhattisgarh is implementing various government schemes for the welfare of farmers. Farmers are taking economic benefits of modern agriculture by taking advantage of these schemes. For the last 10 years, farmers of Bhaisgaon village of Bastar district of Bastar district were doing traditional rainfed farming. Farmer Mahadev is constantly contacting the field officers of the Agriculture Department and following the technical advice given from time to time, more crop production is being done by farming through scientific method. Due to which maximum benefit is being achieved in minimum installment cost. Tubewell mining has been done by Mahadev on a grant under the farmer prosperity scheme run in the department. In the Kharif year 2019, paddy was cultivated by the farmer in an area of ​​Kharif, from which he got a net profit of one lakh 20 thousand rupees and in the Kharif year 2020, the farmer planted paddy in the queue method, so that one lakh 80 thousand rupee Net income received. In the current Rabi season, peas, cabbage and other crops are being harvested by farmers in 2 acres. Due to which additional income is being received.