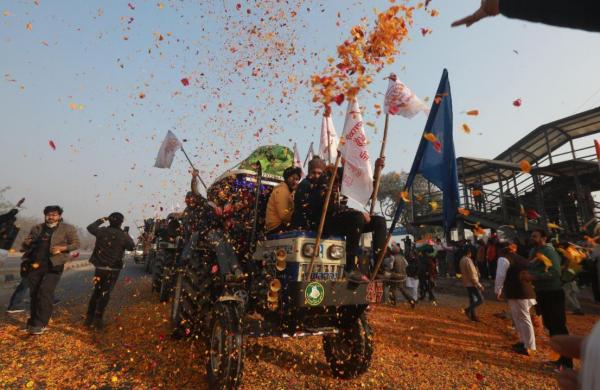 By PTI
NEW DELHI: Farmer union leaders took out a “Sadbhavna rally” from the Singhu border on Thursday to reinforce a sense of unity among the protestors, two days after their tractor parade turned violent, leaving 394 security personnel injured and one agitator dead.

Several farmer union leaders, including including Balbir Singh Rajewal, Daljeet Singh Dallewal, Darshan Pal and Gurnam Singh Chaduni, who led the rally said the march was organised “to counter the forces trying to divide the protesting farmers along religious lines and as per states” and to show that they respect the tricolour.

Several tractors and two-wheelers with the national flag took part in the 16 km-long rally which started from the stage at the Singhu protest site and went up to the beginning of the Kundli-Manesar Palwal highway.

This rally was a response to the government’s allegations that the farmers insulted the national flag on Republic Day.

Farmers from both Punjab and Haryana participated in the rally which displayed immense unity between the two states.

“We wanted to take out this rally to show that the farmers respect the national flag more than anyone else. And this country belongs to the farmers, because it is functioning essentially because of its farmers and the labourers,” said Avtar Singh Mehma of the Krantikari Kisan Union (Punjab).

He added that all the participating vehicles in the rally did not have their farmer union flags, but just the tricolour.

Throughout the course of the rally, participating farmers chanted slogans of farmer unity and Punjab-Haryana brotherhood.

Jagmohan Singh, the general secretary of Bharatiya Kisan Union Ekta (Dakaunda) said the rally was organised “to counter the forces trying to divide the protesting farmers along religious lines and as per states”.

“Historically Punjabis and Haryanvis have always protected the honour of the tricolour, and now this government is making cases against us for disrespecting the national flag. We will never let the government malign the farmers’ struggle, and all of us will fight as a unified force,” Jagmohan Singh said.

“Patriotism is not exercised just by a particular group of people” it is the families of farmers that give Indian army its soldiers. Farmers are equally patriotic if not more, he added.

The rally comes two days after the tractor rally parade on Republic Day, which resulted in clashes between the farmers and police in different parts of the city.