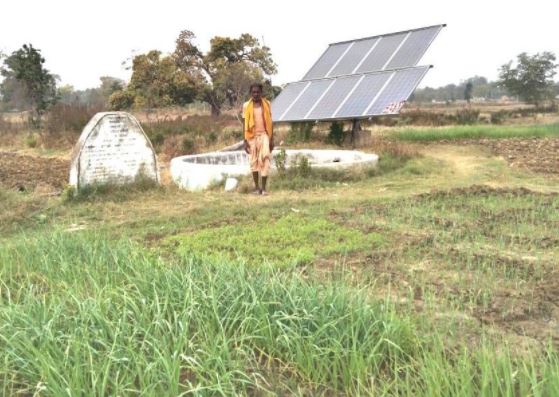 The livelihood promotion in the district under Mahatma Gandhi National Rural Employment Guarantee Scheme has changed the lives of many families. By strengthening the means of living, people have opened the doors of economic progress. The resources created by Mahatma Gandhi NREGA have strengthened the livelihood of the beneficiaries. New resources have also made them capable that they are now helping others in adverse circumstances. In the same way, Kamal, a marginal farmer of village Jhiripani of Devbhog block located in the end of the district, has changed the direction of his life from a well. Now they are earning an income of 60 to 70 thousand rupees annually. After acceptance of the well construction under the MNREGA scheme, a proposal was made to dig the well in the panchayat. After receiving administrative approval of 1 lakh 65 thousand, the work started. Excavation of the well 30 feet deep and 12 feet wide created 380 man-days of employment. Thus the well was prepared. Due to the land being unusable before the well was formed, the work of any crop and vegetable fence was not possible, but today after the well is formed on the said land, the vegetable garden is being irrigated through the well. Due to which the economic condition of the farmer was strengthened. Planting of vegetables was started by the farmer. With this, the total income is getting 30-40 thousand per year with its own use and up to 20-30 thousand in the Kharif crop, in this way, the farmer’s well is up to about 50-70 thousand in a year. Income is being received.
In view of the yield of the farmer, solar panels were installed in the well through grants through Agriculture Department and CREDA. This facilitated the farmer to irrigate the vegetable garden. A fruit tree has been planted by the farmer around Kanua so that he can earn income by selling fruits. Presently, farmers have planted tomato, tarai, gourd, makhana, barbatti, onion bhaji, semi, garlic, coriander, reflux in their farm. Fruit trees like banana, papaya, jackfruit, munga and guava plant have also been planted around the well. In view of the yield and efforts of the farmer, Mr. Chandrakant Verma, Chief Executive Officer of Zilla Panchayat was also inspected and praised. Now, on the instructions of District CEO Shri Verma, information is being given about the new schemes by the District Panchayat and Agriculture Department by encouraging farmers regularly.