Farmer is the donor of the country, we are fulfilling the promises made to farmers: Minister Shri Akbar 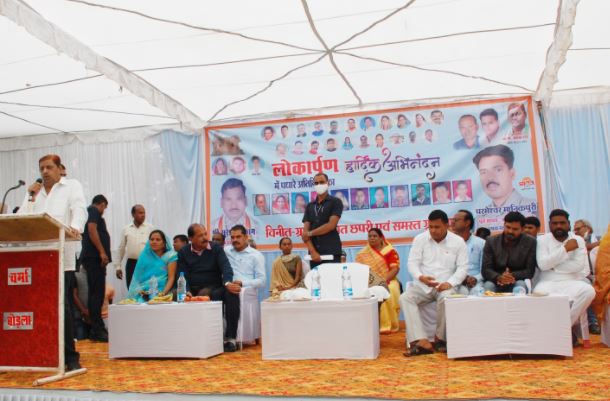 The state’s Minister for Forest, Transport, Housing and Environment, Mr. Mohammad Akbar inaugurated the Rajiv Gandhi Seva Kendra building constructed at a cost of Rs 14 lakh in village Chhapari in his constituency. He said that with the construction of Rajiv Gandhi Seva Kendra building at the village level, local common citizens of the state will get full benefit from the state government and the scheme of Panchayat and Rural Development.
Addressing the farmers and women present at the inauguration, Minister Shri Akbar said that the farmer is the donor of our country. He said that our country and the state of Chhattisgarh depend on agriculture. He said that the progress and development of the state is ensured in the country and the state where the farmers do their farming with happiness and peace. He said that the promises we made to farmers are being fulfilled. The Government of Chhattisgarh is fulfilling this resolution under the leadership of Chief Minister Mr. Bhupesh Baghel. The Rajiv Gandhi Nyaya Yojana has been launched by the Government of Chhattisgarh with the objective of economic prosperity and progress of the Annadata farmers and to provide true value of their produce to the farmers and increase crop productivity. Under this scheme, farmers are also getting full benefits this year.
Minister Mr. Akbar said that on the promise made to the people of the state, our government started implementation from day one. In the last two rains, the state government has taken steps for the development of all sections of the state including villages, poor, farmers, laborers, forest dependents, women, children, youth. He has said that in these two years we have fulfilled 24 big promises for the prosperity, economic prosperity and progress of the state from village to city. All the promises will be fulfilled in the coming five years. He said that under the leadership of Chief Minister Mr. Bhupesh Baghel, about 9 thousand crore rupees of short term agricultural loan of 18 lakh farmers of the state, waived of 244 crore rupees of 17 lakh farmers in the form of water tax, 1764.61 hectare land acquired in Bastar district Back, the Rajiv Gandhi Kisan Nyay Yojana has been launched in the state with an aim to provide the farmers with the right price for their produce and increase crop productivity. More than 19 lakh farmers will be given input assistance of Rs 5750 crore in four installments. 4500 crores has been paid in three installments. The last installment will be given in the month of March. Our government launched the first-of-its-kind scheme in the country – Godan Nyaya Yojana, under which cow dung is being purchased in Gothan at the rate of Rs. 2 kg. Through this scheme, organic farming, animal care and crop protection were ensured, as well as proved to be an additional source of income for the farmers.