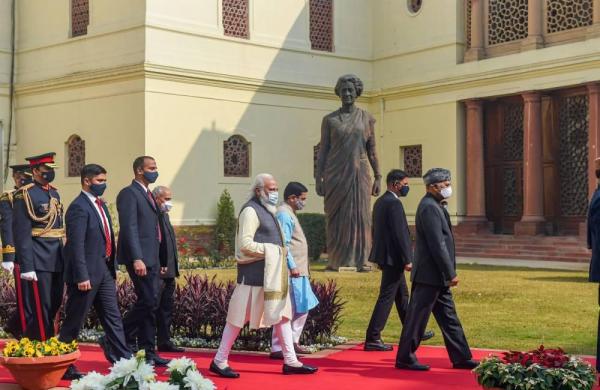 By Express News Service
NEW DELHI:  First day of the Parliament’s Budget Session saw the opposition protest in front of the Gandhi statue against the farm laws.

As many as 20 opposition parties boycotted the presidential address and held protests in the Parliament complex.

Left MPs marched near Parliament, demanding justice for farmers. BJP criticised the opposition for boycotting the presidential address, saying it was a ‘mattter of regret’.

There was drama inside the House too.

Rajasthan’s MP Hanuman Beniwal held out a placard and raised the slogan ‘repeal all three black laws’ during President’s address at the start of the Budget Session.

Beniwal is the chief of Rashtriya Loktantrik Party, which left the NDA recently in protest against the farm laws.

In the Lok Sabha during obituary references, Congress MP Gurjeet Singh Aujla said the house should pay respect to farmers who died during the agitation. The Speaker did not allow him to speak further.

Union Minister Ravi Shankar Prasad said it was a matter of regret.

BJP leaders added that when they were in the opposition during the UPA rule, they never resorted to boycotting the President’s address despite allegations of corruption and scams.

Prasad said “arrogance” of the Congress is the “real problem” as it believes that it is bound to rule the country despite not having the popular mandate.

Union Minister Prakash Javadekar said that the Congress for the past few years has been pushing a false narrative that the Modi government is against the institutions.

“The hypocrisy of the Congress stands exposed after the boycott,” said Javadekar.