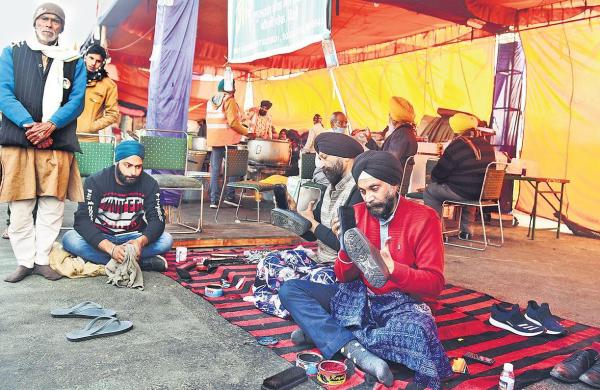 Express News Service
NEW DELHI: All eyes will be on the Supreme Court on Tuesday when it is likely to pronounce orders on various issues related to the new agriculture laws and the farmers’ ongoing protest at Delhi borders and may take a call on setting up of a committee headed by a former Chief Justice of India (CJI) to find ways to resolve the impasse.

A bench, headed by CJI S A Bobde, which indicated during the hearing that it may pass orders in parts on the issues concerning laws and farmers’ protest, later uploaded the information on the website. The CJI said he had spoken with former CJI P Sathasivam for heading the panel but “since he does not know Hindi, he declined to be part of the panel”.

Senior advocate Dushyant Dave, who was appearing for protesting farmers, suggested former CJI R M Lodha’s name. The court said it will consider the recommendation.Solicitor General Tushar Mehta appearing for the Centre told the court that the government has done its best to defuse the situation but the farmers have been non-cooperative during the talks. He even asked the court to pass an order to restrain the protests from disrupting the Republic Day celebrations, referring to a proposed ‘tractor rally’ by farmers on that day. To that, Dave asserted that there will be no tractor rally on Republic Day.

However, when the court said it will record his statement, Dave replied saying he would seek instructions. The CJI asked the lawyers — Dave, Colin Gonsalves, Prashant Bhushan and H S Phoolka representing the protesting farmers — to convince aged people and women participating in the agitation to go back.

“I want to take a risk. I want you to tell them that the CJI wants them to go back. Try to persuade them. At some time, we might say in the order that old people and women need not be there in the protests,” the CJI said.On the issue of law and order situation, Bobde said it was for the police to deal with the situation and not the court. “Courts cannot restrain peaceful protest,” he said. Citing the Mahatma Gandhi’s satyagraha, the bench said: “We want to ensure no violence or blood bath in the streets. If somebody breaks the law, you take action. The court would not break any violence.”

Abhay Chautala threatens to quitINLD legislator Abhay Singh Chautala wrote to the Haryana Assembly Speaker on Monday, saying if the Centre doesn’t withdraw the farm laws by January 26, then his letter may be considered as his resignation as an MLA. He slammed the Centre for imposing the “black laws”.

Shoe polish service for freeIn the spirit of community service, a group of volunteers from the Sisganj Gurudwara in Delhi’s Chandni Chowk are offering to polish shoes of farmers protesting at the Singhu border for free.The sewadars sit on the ground and urge people to offer their ‘jodas’ at a makeshift counter