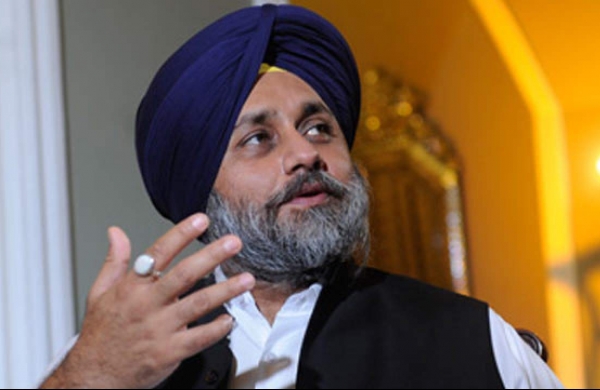 Underlining that the SAD is a party of “peasantry”, Badal said he spoke to Bharatiya Kisan Union (BKU) leader Rakesh Tikait, who is leading the farmers’ protest at Ghazipur, and assured him of all support.

Earlier in the day, farmers camping at the Singhu border clashed with a large group of men claiming to be local residents who reached there to vacate the area.

Police fired tear gas shells and resorted to baton charge to break up the clash.

On Thursday, the Ghaziabad administration gave an ultimatum to farmers protesting at UP Gate in Ghazipur on the Delhi-Uttar Pradesh border to vacate the site by midnight.

He asked if the government wants to create communal tension in the country.

The former deputy chief minister of Punjab said, “The struggle, the fight to repeal three farm laws is not of any specific religion or caste, it is of the entire farming community. The Centre cannot suppress the voice of farmers.”

Describing farmers as ‘annadatta’, Badal said they don’t need a certificate for their patriotism from any party and cannot be termed anti-national.

Meanwhile, the party on Friday asked its party cadre to rush to the three farmers’ protest sites on Delhi borders in large numbers to give a further boost to the ongoing agitation.

SAD president Sukhbir Singh Badal also spoke to farmer leader Rakesh Tikait and discussed ways to shore up more strength and support for the farmers’ agitation in Delhi, especially in view of the “combined onslaught against farmers by the BJP and the Centre”, a party statement said.

Consequent upon the telephonic conversation with Tikait, Badal instructed the Akali cadre to rush to Delhi borders in larger numbers than before and lend strength to the peaceful movement, it added.

While many Akali contingents have already joined the farmers in the gathering, more are on the way in large numbers, Badal said.

Senior SAD leader Bikram Singh Majithia also appealed to SAD and Youth Akali Dal (YAD) workers who had returned to Punjab during the past one week to go back to the protest sites at Singhu, Tikri and Ghazipur, the statement said.

The leaders had extensive talks with Tikait and discussed ways to lend more strength to the agitation, it added.

The delegation assured Tikait of “whole-hearted support in terms of men, material and morale” to the farmers’ cause, the statement said.

Majitha said more partymen need to be at protest sites when the government wants to crush the agitation.

“I know a large number of you have been camping on the Delhi borders since the last two months. However, the central government is making attempts to crush the ‘kisan andolan’ (agitation) in league with the BJP government in Haryana,” he said.

“We must ensure this nefarious design to silence the voice of the ‘annadaata’ and disrespect the sacrifice of eighty martyrs (farmers) does not succeed at any cost.

No sacrifice is too big to ensure a win for the peasantry as well as ensuring peace and communal harmony,” the statement quoted Majitha as saying.

The SAD leader also condemned the “crude attempts” being made to suppress the farmers’ agitation against the Centre’s new farm laws “by letting loose lumpen elements on peacefully agitating farmers at Ghazipur on Thursday during the course of which farmer leader Rakesh Takait was targeted”.

“Similar attempts were made at Singhu border on Friday,” he alleged.

Majithia said such scenes were “extremely unfortunate” in a democracy.

“Coercive steps like cutting off water and power supply to the dharna sites and stopping food from reaching them would only strengthen the kisan andolan even further.”

He said it was also condemnable that the “central government was instigating communities to fight against each other and also fomenting fights between farmers as well as farmer organisations”.

He appealed to farmers, farm labourers and people to maintain peace and communal harmony “despite grave provocations”.

Majithia also denounced the manner in which the Unlawful Activities (Prevention) Act (UAPA) was being “misused” against farmer leaders and journalists.

He said the UAPA had been framed against those challenging the unity and integrity of India and should not be used to persecute innocent people.

Farmers should not be singled out for fighting for the repeal of the three agricultural laws as well as the implementation of the Swaminathan Commission report in letter and spirit.

Majithia, whose party had snapped ties with the NDA over farm laws issue, said the central government had not taken any action against those indulged in wrongful acts on Republic Day in Delhi “which has sent a clear message to the people that state agencies were behind them.