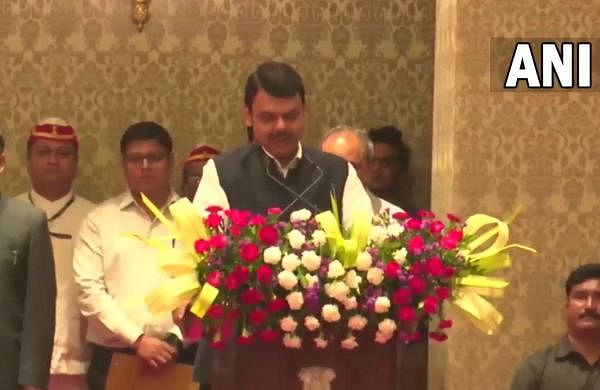 PUNE: NCP chief Sharad Pawar on Thursday claimed that BJP leader Devendra Fadnavis did not appear to be happy while accepting the deputy chief minister’s post in Eknath Shinde’s government.

While rebel Shiv Sena leader Shinde was sworn in as the new chief minister of Maharashtra following the collapse of the Shiv Sena-NCP-Congress government, Fadnavis, a former CM who had said he would remain outside, took oath as Shinde’s deputy.

“I think Fadnavis has not accepted the number two position happily. His facial expression said it all,” Pawar told reporters in Pune.

“(But) He is from Nagpur and he has worked as a `swayamsevak’ (with the RSS) and there, when an order comes, it has to be followed,” the NCP chief said, adding that Fadnavis might have accepted a junior position due to this ‘sanskar’ (values).

He also spoke about the alleged misuse of central agencies under the BJP government, claiming that he received “love letters” from the Income Tax department regarding his election affidavits in 2004, 2009 and 2014.

Pawar also said that the Eknath Shinde faction, which was camping in Guwahati after rebelling against the Uddhav Thackeray government, had not expected that their leader would become anything more than a deputy CM.

“But after the BJP’s central leadership gave the orders, chief minister’s post was given to Shinde. Nobody had an inkling about it. I think Shinde himself had no idea. The second surprise, which I do not think is a surprise really, is that Devendra Fadnavis, who worked as CM for five years and then opposition leader, had to take the post of Deputy CM following directions from the central leadership,” said Pawar.

He, however, noted that there have been such instances in the past too.

Pawar also rejected rebel Sena MLAs’ claims that the Sena’s tie-up with NCP and Congress was the primary reason for their rebellion.

“This allegation is baseless. It has no connection with NCP and Congress. Something has to be told to people (as an excuse), which is why NCP and Congress are being blamed,” he said.

Pawar also said that he spoke to Shinde and congratulated him. “Once a person becomes chief minister, he is the CM of the state. He becomes the head of the state and I expect that he would work towards solving the issues of people,” the NCP chief said.

Asked about the collapse of the MVA government and what went wrong, Pawar said the Uddhav Thackeray-led government had not fallen short on any front.

“Shinde showed the capability of taking away 39 MLAs, and the success (of his rebellion) lies there. I learnt that the preparation for this was going on for long, as travelling to Surat, from there to Guwahati and then to Goa, these arrangements do not take place suddenly,” he said.

As to questions being raised about Uddhav Thackeray’s leadership, Pawar said once the Shiv Sena chief reposed faith in someone, he gave that person full responsibility.

“We saw that he had given all the responsibility of the party organization and Legislative Assembly to Shinde. He (Shinde) was given the reins, and I do not know if this development was the fall-out,” the NCP chief said.

Asked about parallels being drawn between the developments of 45 years ago when he toppled the Vasantdada Patil government and became chief minister, Pawar said there were no complications like today then.

“We just decided and told Vasantdada that they (the MLAs in Pawar’s group) wanted to resign, and after that, he also resigned,” Pawar said.

About the Supreme Court allowing a floor test to proceed in Maharashtra, Pawar said the BJP and Shinde faction had a majority, and once such a situation becomes clear, it should be accepted.

“Uddhav Thackeray, after realising that he has lost majority, resigned gracefully,” he added.

About accusations that Shiv Sena MP Sanjay Raut was responsible for the implosion within the party, Pawar said the Shiv Sena was not finished yet, and cited the examples of past rebellions which it survived.

The biggest challenge before the new government would be to gain “credibility” and people’s faith, the veteran politician said.

Asked if the MVA alliance will continue in the coming polls in Maharashtra, Pawar said that no decision has been taken in this regard yet.