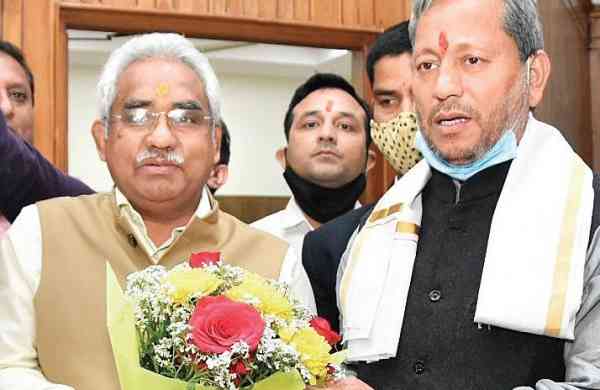 By Express News Service
NEW DELHI:  The BJP appears to have opted for a “faceless” leadership in Uttarakhand to contest next year’s Assembly elections in the name of Prime Minister Narendra Modi. In selecting Tirath Singh Rawat as the new chief minister, BJP has sought to silence the ambitions of factions within the state unit by sending out the message that Brand Modi will overwhelm the anti-incumbency against the state government.

On Friday, the saffron party projected a semblance of caste balance by appointing Madan Kasuhik, a Brahmin, as the state unit president. The new chief minister is a Kshatriya. Uttarakhand politics is known to have two strong electoral bases in the Brahmin and Kshatriya castes.

The BJP has seemingly taken confidence from the Bihar poll verdict where the party topped its senior alliance partner JD (U) despite an overwhelming anti-incumbency factor against the NDA government. “It was Brand Modi which pulled through in the Bihar elections despite the local leadership struggling to pull crowds and Chief Minister Nitish Kumar facing public anger in the rallies.

With no big face in the party in Bihar, the leadership in the state was also faceless, which didn’t allow room for faction fighting. The Bihar message is being sent afresh in Uttarakhand,” said a senior BJP functionary in the know.

The move to take former Deputy Chief Minister Sushil Kumar Modi off state politics is seen within the party as a pattern repeated in the removal of Trivendra Singh Rawat as chief minister. Tirath Singh Rawat is a rank outsider in the power game, which gives the party’s central leadership scope to experiment due to the “mass appeal of the Prime Minister”.

With the BJP amplifying the Central schemes in state elections, the saffron outfit also seems to be confident that Brand Modi can blunt the anti-incumbency factor in the party-ruled states. With Uttarakhand going to the elections in less than a year, the BJP estimates that the new CM will at best be seen as the representative of the PM in pushing for the implementation of the Central schemes and projects, besides dousing the faction fights.

“One of the first decisions was withdrawing cases registered during the lockdown. Other decisions include review of development authorities which came into existence after 2016,” said Om Prakash, chief secretary.

At around 5.30 pm,  11 ministers took oath. There were  four new faces — Bansidhar Bhagat, Bishan Singh Chuphal, Swami Yatishwarananda and Ganesh Joshi. Apart from CM, the state now has eight cabinet ministers and 3 ministers of state. Distribution of departments will be done soon. Of the 13 districts in the state, Pauri has three ministers. Udham Singh Nagar and Dehradun have two each. Others ministers are from Haridwar, Nainital, Tehri, Pithoragarh and Almora districts.