Explained: How glaciers can burst and send floods downstream 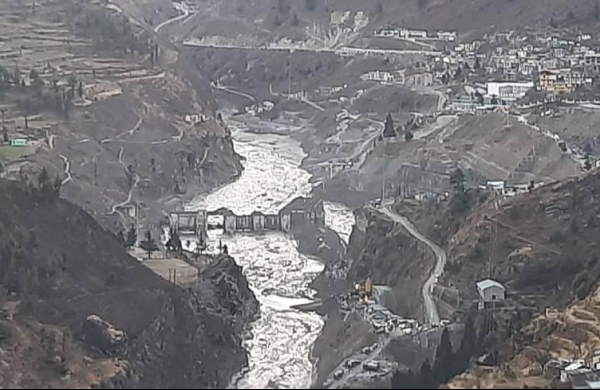 By Associated Press
The floods that slammed into two hydroelectric plants and damaged villages in Uttarakhand were set off by a break on a Himalayan glacier upstream. Here’s a look at how glaciers and glacial lakes form and why they may sometimes break:

HOW GLACIERS AND GLACIAL LAKES FORM

Glaciers are found on every continent except Australia and some are hundreds of thousands of years old. A large cluster of glaciers are in the Himalayas, which are part of India’s long northern border. Sunday’s disaster occurred in the western part of the Himalayas.

Glaciers are made of layers of compressed snow that move or “flow” due to gravity and the softness of ice relative to rock. A glacier’s “tongue” can extend hundreds of kilometers (miles) from its high-altitude origins, and the end, or “snout,” can advance or retreat based on snow accumulating or melting.

“Ice may flow down mountain valleys, fan out across plains, or in some locations, spread out onto the sea,” according to the National Snow and Ice Data Center.

Proglacial lakes, formed after glaciers retreat, are often bound by sediment and boulder formations. Additional water or pressure, or structural weakness, can cause both natural and manmade dams to burst, sending a mass of floodwater surging down the rivers and streams fed by the glacier.

WHY DID THIS GLACIER BURST?

It’s not yet known what caused part of the Nanda Devi glacier to snap off Sunday morning, sending floodwater surging downstream toward power plants and villages in India’s northern state of Uttarakhand.

Seismic activity and a buildup of water pressure can cause glaciers to burst, but one particular concern is climate change. High temperatures coupled with less snowfall can accelerate melting, which causes water to rise to potentially dangerous levels.

“Most mountain glaciers around the world were much larger in the past and have been melting and shrinking dramatically due to climate change and global warming,” said Sarah Das, an associate scientist at Woods Hole Oceanographic Institute.

CAN SUCH DISASTERS BE PREDICTED?

Past deadly or highly destructive glacial floods have occurred in Peru and Nepal.

But the remote locations of glaciers and a lack of monitoring mean we don’t have a clear understanding of how often they occur and if they are increasing, Das said.

“Given the overall pattern of warming, glacier retreat, and increase in infrastructure projects, though, it seems natural to hypothesize that these events will occur more frequently and will become overall more destructive if measures are not taken to mitigate these risks,” said Das.

A number of imminent potentially deadly glacier burst and flood situations have been identified worldwide, including in the Himalayas and South American Andes.

But while monitoring is possible, the remoteness of most glaciers presents challenges.

“There are many glaciers and glacial dammed lakes across the Himalayas, but most are unmonitored,” Das said. “Many of these lakes are upstream of steep river valleys and have the potential to cause extreme flooding when they break. Where these floods reach inhabited regions and sensitive infrastructure, things will be catastrophic.”

A 2010 information page published by the International Centre for Integrated Mountain Development called for more glacier monitoring in the Hindu Kush Himalayas to better understand “the real degree of glacial lake instability.”

The region where the glacial burst occurred is prone to landslide and flash flooding, and environmentalists have cautioned against building in the region.