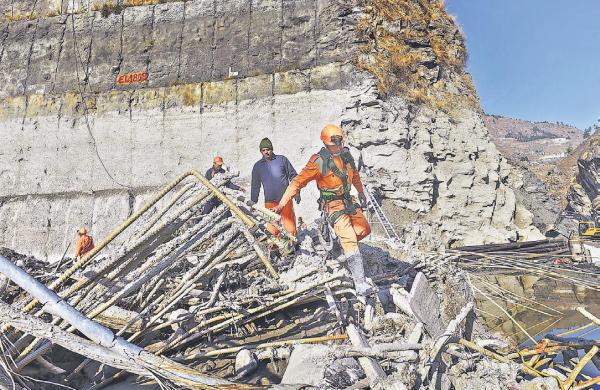 Express News Service
DEHRADUN: Efforts to drain out the lake that has formed 8 km upstream from Raini village in Chamoli district of Uttarakhand after February 7 flash floods are on.  A team of ITBP and DRDO has reached the spot and will be camping there to assess the ground situation and the ways to drain the lake safely. Om Prakash, chief secretary of Uttarakhand said, “The teams of experts, scientists and ITBP are on the ground to assess the situation about the lake.

We will soon decide the course of action based on their report.” The water is draining through three streams which have formed through rubble which is acting as a dam. The search operations also continue, with total 61 bodies recovered till date while 143 people are still missing. Nilesh Anand Bharney, in-charge of State Police Disaster Control Room, said two bodies were recovered from the Tapovan tunnel and one from Raini village on Thursday.

Meanwhile, several groups and outfits have come up with various demands in the wake of the flash floods. Shivanand Saraswati, founder of Haridwar-based Matri Sadan, has announced to go on fast-unto-death from February 23 against hydropower plants in Uttarakhand. A group of social workers have urged the government to register a case of murder and criminal negligence against NTPC, to order a probe headed by a retired high court or SC judge, and provide Rs 50 lakh as compensation and permanent job for one member of each of the aggrieved families.