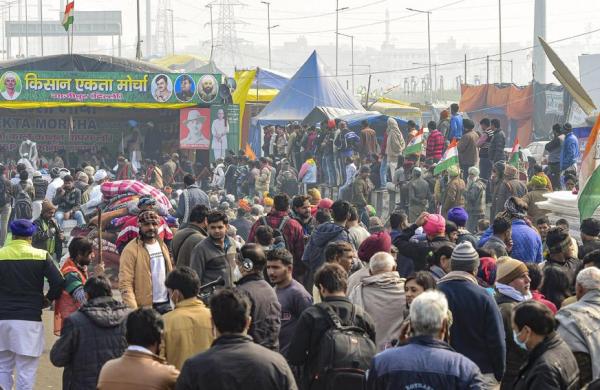 By PTI
CHANDIGARH: Farmer leader Balbir Singh Rajewal on Saturday said he expects a record gathering by February 2 at the border points of Delhi, where farmers are protesting against three recent agriculture laws of the Centre, with a large number of people from various states turning up.

“We have been holding a peaceful agitation at Delhi’s borders since January 26. Today also the agitation is peaceful,” Rajewal, the president of the Bharatiya Kisan Union (Rajewal), told reporters here.

He also condemned the violence in Delhi on Republic Day and said it was unfortunate.

“Possibly by February 2, there will again be a record gathering of people at the protest sites,” he said, adding that the agitation would remain peaceful.

The Haryana government on Friday decided to suspend mobile internet services in 14 more districts in the state until Saturday 5 pm “to prevent any disturbance of peace and public order”.

Earlier it had suspended the services in three districts.

Rajewal accused the Centre of instilling a sense of fear among people by showing pictures of the “unfortunate incidents”, apparently referring to the January 26 violence in the national capital during a tractor parade by farmers.

“The government is trying to mislead people through false propaganda in order to defame the ongoing agitation,” he alleged.

Rajewal appealed to those joining the agitation at Delhi’s borders to keep the protest peaceful. He asked them not to get provoked, which could affect the peaceful agitation.

“It is our responsibility to keep the agitation peaceful,” he stressed.

Rajewal accused the government of trying to trigger violence by provoking the farmers at the protest sites.

“But we are alert. We will not indulge in any kind of violence,” he said.

The farmer leader appealed to the Centre to shun its “stubborn attitude” and withdraw the three farm laws.

On the next meeting between the protesting farmers and representatives of the government, he said “when they call us, we will certainly go”.

Since they have already taken action, what reply are they seeking?” Asked again, he said, “We will send them a reply.”

The Delhi Police has issued the notices to around 20 farmer leaders, including Rajewal, over the violence during the farmers’ tractor parade, asking why legal action should not be taken against them.