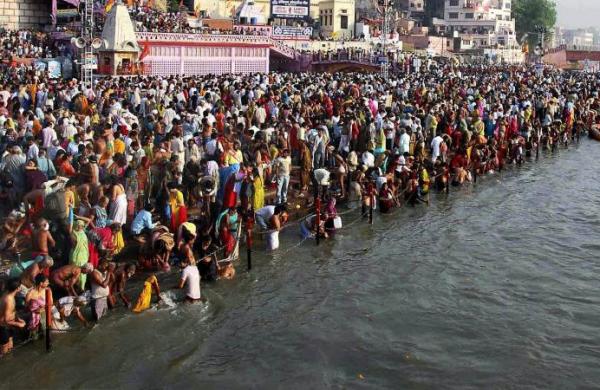 Express News Service
DEHRADUN: Centre has directed the Uttarakhand government to follow all the ‘stringent measures’ to control the spread of the Covid 19 in Mahakumbh 2021.

In a letter to Uttarakhand Chief Secretary, Union Health Secretary Rajesh Bhushan has ‘strongly’ highlighted the concerns raised by the high-level central team during its visit to Uttarakhand.

“Currently more than 12 states in India have shown a surge in covid-19 cases during past few weeks, and pilgrims expected to visit Haridwar during the Kumbh Mela could also be from these States. As per the report of the Central Team, 10-20 pilgrims and 10-20 locals are being reported positive every day. This positivity rate has the potential to rapidly turning to an upsurge in cases, given the expected large footfall during Kumbh,” stated the letter.

The letter also added the need for stringent measures to control the spread of Covid-19 during the ongoing Kumbh in Haridwar of Uttarakhand.

A high-level team led by the director of the national center of disease control (NCDC) visited Uttarakhand on March 16-17, 2021 to review the preparedness for the Mahakumbh.

With newly sworn-in Chief Minister Tirath Singh Rawat announcing that except center’s guideline no restrictions will be implemented in Mahakumbh, officials of the Uttarakhand state government are worried given the shortage of forces in the upcoming religious congregation.

Officials told that at least 15000-20,000 extra force personnel are needed to manage the security of the Mahakumbh.

On April 14, which is also the day of the Baisakhi festival the estimates suggest that over 1 Crore devotees may visit the holy city of Haridwar. Officials also added that over 2 Crore devotees can visit Haridwar between April 11-14.

Earlier, the estimates were about 50-60 lakh people visiting the congregation but with the change of guard in the state things changed drastically.

The new CM has made the Mahakumbh his priority with setting the agenda straight. His first order as the CM was to shower flowers on the occasion of Shahi Snan (Royal Bath) on Mahashivratri on March 11.

The hill state has already requested forces from many states including neighboring state of Uttar Pradesh but the states have not responded yet. Officials added that UP has panchayat elections due soon due to which chances of availability of force has become slim.