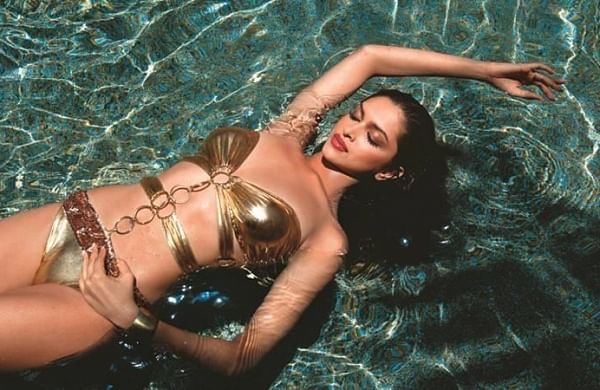 NEW DELHI:  After a long stint of 19 years, the Kingfisher Swimsuit Calendar comes to an end. The calendar published annually by the United Breweries Group of India published the last edition in 2021.

Since 2003, it was one of the most prestigious calendars to be released from India and can be credited as being a launchpad for leading models and actresses. Katrina Kaif, Deepika Padukone, Yana Gupta, Sonali Raut, Ujjwala Raut, Nargis Fakhri, Bruna Abdullah, Deepti Gujral, Lisa Haydon, and Angela Jonsson have all been featured on its pages.

The calendar has been shot in exotic destinations around the globe. The Kingfisher Swimsuit Calendar 2021 was brought back to the home base and was shot during the pandemic in Kerala.

Ace photographer Atul Kasbekar has been the man behind the lens since its inception. He is the only celebrity photographer in Asia, who has been associated with a calendar and the brand for so long. As the curtains come down on the calendar, IANSlife caught upwith Kasbekar to look back at the making of the annual Calendar and an era of fashion and beauty.

The Kingfisher calendar was the first luxury corporate calendar out of India, comparable to international calendars. what was the vision you started out with?

Kasbekar: I believe what happened with the calendar was that it began to act as a platform to showcase talent; we discovered that many people from the calendar rose to stardom, and if you were chosen for it, it almost put you in another orbit. The spotlight was on the talent that featured in it, and it took things to a higher level.

Of course, whether it was Katrina Kaif, who was in the first edition, Deepika Padukone, Yana Gupta, Nargis Fakhri, Saibi Kher, and all the others, rose a few notches, it aided their careers greatly, in a manner of speaking, we had a very high ratio of talent spotting. What was the idea behind the calendar?

Kasbekar: Two decades ago, to understand the context in which the Kingfisher calendar started, for me as a photographer, it was an opportunity to do something that involved me reporting to the client directly, which was a great relief given that, otherwise, you have to go through the agency route and a lot of layers in any kind of approval on real creativity.

So I had this idea for doing something which is a cross between Pirelli and Sports Illustrated (The Pirelli calendar photographs models with different photographers over the years, and women are the theme). It’s really the photographers’ interpretation, and you can only get the Pirelli calendar from the chairman’s desk; you can’t buy one. Sports Illustrated has always been a swimsuit calendar shot on exotic beaches around the world, but you can easily get it from a book store.

We did a swimsuit calendar because it’s Kingfisher beer, and a cold beer on a warm beach is a fantastic drink, and it just seemed ideal. The perfect brand fit, the marriage of the two lay in the context of that you couldn’t get it at a book store it was sent to you if your name was on a list.

To be a Kingfisher calendar girl meant you had arrived in the modeling world, who were the most memorable models you’ve shot with?

Kasbekar: The really famous models are already known; they went on to become movie stars, but there have been some stunning models over the years that we have shot, like Angela Jonsson, Kanishtha Dhankar, Lisa Haydon, Kate Mara, and Priya Emmanuel, so there have been a bunch of people who were really amazing and a joy to shoot with, and it has honestly been a privilege.

You shot the calendar year-on-year without falling into the trope of casting celebrities. who can we credit for this?

Kasbekar: The calendar started making a name for itself for making people famous and giving them a platform, and so we saw no reason at any point in time to use the crutch of using someone famous. To say that the idea was not thought about more than once, and due credit goes to the people who believed in the power of their own property ie the calendar, and decided not to go down the route.

Will you miss shooting a calendar, and do you believe there’s a corporate who would like to release one. What will it take to get you to shoot for it?

Kasbekar: I think I always saw the calendar work as a form of calendar art in a very commercial sense, but it was still in the zone of commercial art, at least in my head, and I would love to do a project like this. There are two things to bear in mind, one is that I think visual communication really needs to focus more on photography as an art form and a form of expression, and for me to shoot one, will be an exciting prospect.

The very thought of a calendar, per se, the last two decades, has diminished. Nobody really puts up a calendar anymore. So only if you do something like this, if it transcends into an art form, and if someone goes into that space, it would be an absolute joy to collaborate as an artist.

Your most memorable year and why?

Kasbekar: It would be cliche to say that every year is special, but I will say that it has always been fantastic to shoot in South Africa because there is so much it offers. In fact, we have shot there three times and each time was different, demonstrating the sheer range of photography and backgrounds available in that beautiful country. The other place that I would love to return to for a shoot or otherwise is Mykonos in Greece.

Beauty and fashion reality shows didn’t quite take off in India as they did in the West despite lockdown and the number of OTT platforms, why?

Kasbekar: To be honest, I never watched too many of these beauty and fashion reality shows. The Kingfisher calendar had a hunt for the Kingfisher calendar girls, which I think ran with reasonable success for 4-5 years and discovered some interesting new faces. I was part of that as a part of my commitments to UB group and the project.

I am the wrong person to ask about the reality show’s success in India. Having said that, I have to confess that I have friends who watch Bigg Boss with incredible regularity and when that conversation starts, I have literally nothing to contribute.

What’s next on the charts?

Kasbekar: We are in talks with the UB Group to see if we can transcend going above and beyond the calendar project. We are hoping to come up with something that’s more with the times. I am very keen that it goes into some kind of digital art kind of space. That’s what I am hoping to do.

Separately, we have been producing movies, ‘Loop Lapeta’, which is our homage to Rum Roller Run, the Greman classic, is going to be out on Netflix in early February. Then there are 3-4 other films that we look forward to this year. We have kept ourselves quite busy in the pandemic working on material and are putting it together now.