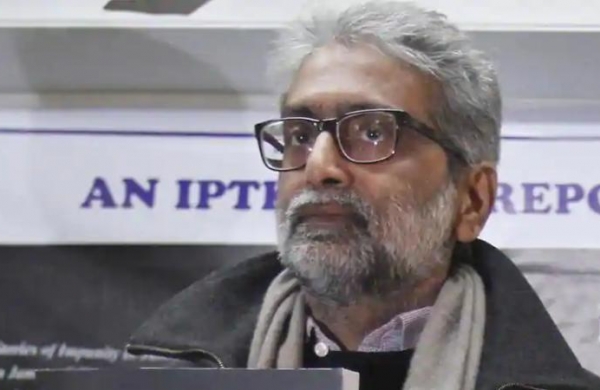 By PTI
MUMBAI: The Bombay High Court on Monday dismissed a statutory bail appeal of activist Gautam Navlakha, an accused in the Elgar Parishad-Maoist links case, saying it sees no reason to interfere with a special court’s “well reasoned order” which earlier refused him bail.

A bench of Justices SS Shinde and MS Karnik said the 34 days that Navlakha spent under house arrest in 2018 could not be counted as the period spent in custody for consideration of the statutory bail.

The civil rights activist was arrested by the Pune police on August 28, 2018, but not taken in custody.

Between August 28 and October 1, 2018, Navlakha was kept under house arrest.

He also spent 11 days in the NIA’s custody from April 14 to April 25 last year, after he surrendered following re- registration of an FIR against him in January 2020.

Since then, he has remained in judicial custody and is lodged at the Taloja jail in neighbouring Navi Mumbai.

The National Investigation Agency (NIA) is conducting a probe into the case.

He had sought statutory or default bail on the ground that he had been in custody for over 90 days, but the prosecution failed to file a charge sheet in the case within this period.

His counsel, senior advocate Kapil Sibal, had argued that Navlakha already spent 93 days in custody, including 34 days of house arrest between August 28 and October 1, 2018, and the HC must count house arrest as the period of custody.

Additional Solicitor General SV Raju, appearing for the NIA, had opposed the application, contending the special court had rightfully held that Navlakha’s house arrest did not constitute detention.

He had said that during such house arrest, Navlakha was not accessible for interrogation as he would have been if in regular custody.

It had also quashed a transit remand, thus preventing the Pune police from taking Navlakha to the Maharashtra district from Delhi for questioning.

Raju referred to the Delhi HC’s order quashing Navlakha’s arrest to point out that after the order, the activist had gone ahead and filed an anticipatory bail application, which showed the house arrest was not custody as per Section 167(2) of the Criminal Procedure Code (CrPC).

However, in its judgement, the Bombay HC answered the above question in negative.

“It is not possible for us to fathom a situation where detention of the appellant, though held to be illegal and unlawful, should still be construed as an authorised detention for the purpose of Section 167 (2) of the CrPC,” the HC said.

It said for a person to be eligible for default bail, one’s entire period of 90 days of custody must be authorised by a magistrate’s remand order in accordance with the CrPC.

However, since the 34 days of Navlakha’s house arrest had been held as illegal by the Delhi High Court, that period could not be counted as a period of custody authorised by a magistrate’s court, the Bombay HC said on Monday.

“In our view sans any valid authorisation/order of the magistrate detaining the appellant, the incumbent will not be entitled to a default bail,” the high court said.

Thus, the bench dismissed Navlakha’s appeal, saying it saw “no reason to interfere with the well reasoned order” of the special NIA court.

According to police, some activists made inflammatory speeches and provocative statements at the Elgar Parishad meet held in Pune on December 31, 2017, which triggered violence the next day at Koregaon Bhima village in the district.

The police HAVE also alleged that the event was backed by some banned Maoist groups.