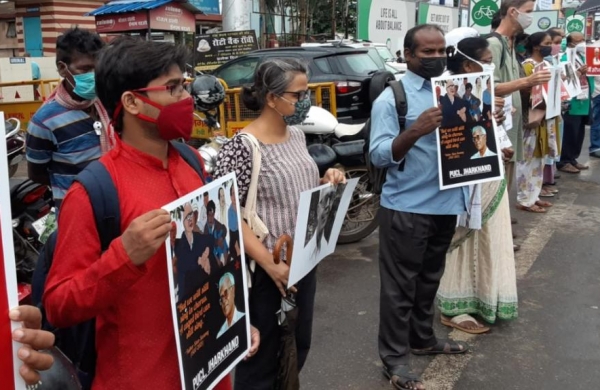 By Express News Service
MUMBAI:  The Bombay High Court on Friday withdrew its oral praise for Late Father Stan Swamy and his work after the National Investigation Agency (NIA) objected to it.

“I had said so far as legal issues are concerned, that is different. Suppose you are hurt that I personally said something, I take those words back. Our endeavor is always to be balanced. We have never made the comments… But you see Mr Singh, we are also human beings and suddenly something happens like this…”

Anil Singh, the advocate appearing for the NIA had taken objections over the comment made by the High Court judges praising the work done by Father Stan Swamy.

He said the comments were twisted by the media. During the posthumous bail hearing, the Shinde said he watched the “graceful funeral of Stan Swamy and considering the kind of services he rendered to the society, he had respect for his work.”

Meanwhile, Mihir Desai, the advocate representing Stan Swamy, said his death should be probed by the magistrate.

Desai said the ex-principal of Stain Xavier College Father Frazer should be part of the magistrate inquiry panel as his next kin.

The inquiry should be done as per human rights guidelines by a magistrate.

Despite heavy rains, people stood together with placards protesting against the alleged injustice. According to members of Jharkhand People’s Union for Civil Liberties (PUCL), the event was a part of the national campaign, called by over 100 organisations, against the institutional murder of Stan Swamy, draconian laws like UAPA and the growing attacks on the right to dissent.