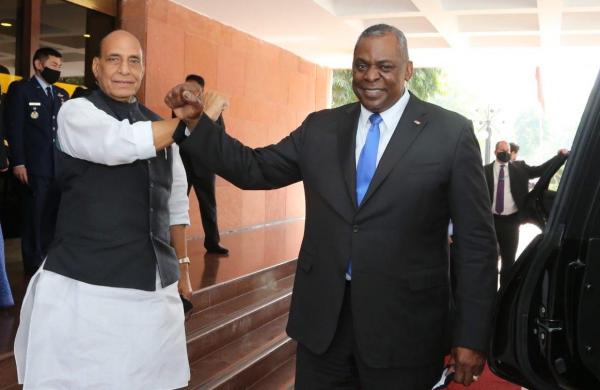 Express News Service
NEW DELHI:  India’s current security challenges like tension with China on the Line of Actual Control and human rights were among issues that figured in talks between External Affairs Minister S Jaishankar and US Defence Secretary Llyod Austin, who is on a two-day trip to India, on Saturday.

Sources said that Austin raised the issue of human rights during his meeting with Jaishankar and said that “as the two largest democracies in the world, human rights and values are important to us and we will lead with these values”.

Sources added that Jaishankar agreed and emphasised that a strong relationship between the two democracies was not only important for both countries but for the rest of the world as well.

Later, at a media briefing, Austin said, “India is our partner whose partnership we value. And I think partners need to be able to have those kinds of discussions. And certainly, we feel comfortable in doing that and you can have those discussions in a very meaningful way and still make progress.”

The issue of human rights was raised amid global concerns raised over the government’s handling of the farmer protest, alleged persecution of minorities and independent voices being gagged. Ahead of Llyod’s visit, the chairman of the Senate Foreign Relations Committee had written to the defence secretary urging him to take up the issue during his visit.

On India-China tension, Austin said in his press briefing that the US never thought the two countries were on the brink of war. Sources said that during the meeting that lasted an hour, the two leaders also discussed the importance of the Indo-Pacific region and the Afghanistan situation in detail.

Earlier, Austin held talks with Defence Minister Rajnath Singh and the two countries decided to increase interaction between their armed forces, specifically with the US military commands having their operations into the Indian Ocean Region, Eastern Coasts of Africa and the Gulf.

“We reviewed the wide gamut of bilateral and multilateral exercises and agreed to pursue enhanced cooperation with the US Indo-Pacific Command, Central Command and Africa Command. Acknowledging that we have in place the foundational agreements, LEMOA, COMCASA and BECA, we discussed steps to be taken to realise their full potential for mutual benefit,” Singh said.

The defence minister quoted the recent Quad summit resolve to maintain a free, open and inclusive Indo-Pacific region. Both India and the US share concerns over increased maritime activities including the patrolling by the Chinese warships and submarines into Indian Ocean Region and Indo-Pacific region.

Singh said the discussions focussed on wide-ranging defence cooperation and expanding military-to-military engagement across services, information sharing, cooperation in emerging sectors of defence and mutual logistics support. This is the first official visit abroad by a top functionary of the new Biden administration.

Austin said his visit was about conveying the Biden administration’s message of the US’s strong commitment to its allies and partners. “India is an increasingly important partner amid today’s rapidly shifting international dynamics,” he said

The US Defense Secretary He said there was discussion on engagement with like-minded partners through multilateral groupings such as the Quad and ASEAN. The 10-nation ASEAN is a key stakeholder in the Indo-Pacific region

Condoling death of pilot in crash

Austin condoled the death of a Group Captain of the Indian Air Force in an accident involving a Mig-21 Bison aircraft in Gwalior this week. “I would like to express my condolences for the tragic accident that killed an Indian Air Force pilot,” he said.