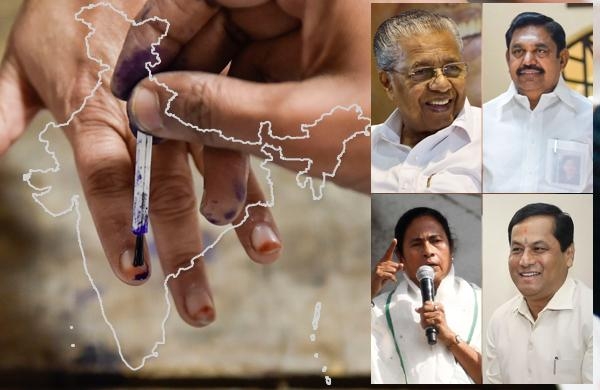 By Express News Service
NEW DELHI / KOLKATA / GUWAHATI: The onset of summer will coincide with soaring political temperatures in the country as four states and a Union Territory will see electoral heat in March-end and April.

The Election Commission of India announced the poll schedule for TN, Kerala and Puducherry in the south and West Bengal and Assam in the east, sounding the bugle for the next big battle for states.

The assembly elections in Bengal will be chief minister and Trinamool Congress chief Mamata Banerjee’s biggest test yet in the face of a saffron onslaught while Assam will see the ruling BJP face a challenge from a plethora of coalitions.

ALSO READ | EC sets the ball rolling for Assembly elections in TN, polling on April 6, counting on May 2

Among the two southern states, Congress nurtures hope of returning to power in Kerala. In TN, the two national parties will piggyback on the local players Congress on the DMK and BJP on the AIADMK.

Puducherry is heading for an interesting fight amid defections from the Congress to the BJP, leading to President’s Rule.

The BJP, under the leadership of JP Nadda, will seek to assert its status as a pan-India party as it hopes to reap political dividends of the Citizenship Amendment Act in Assam and Bengal.

Ranking heavily on turncoats from the ranks of the TMC, the BJP is hoping to build on the massive gains it made in Bengal in the 2019 LS poll, bagging 18 seats and over 40% vote share.

In Assam, the party, in alliance with regional players, will seek to outsmart the Opposition, while the Congress-AIUDF combine will attempt to consolidate minority votes.

In Kerala, the BJP, which had polled about 15% votes in 2016, will make a pitch to establish itself as the third force. To find a foothold in TN, the party is experimenting with caste equations by promoting Dalit and OBC faces.

The Congress, which is grappling with leadership issue and infighting, has grim chances in Bengal, where it’s contesting in alliance with the Left, but is looking at making some gains in Assam. But the party’s main focus is on Kerala, especially because Rahul Gandhi is MP from Wayanad, though the Left Front’s performance in the local body polls is a cause of worry for the Congress-led UDF.

The Model Code of Conduct comes into play from the moment the poll schedule is announced. It ends with the declaration of  the election outcome.