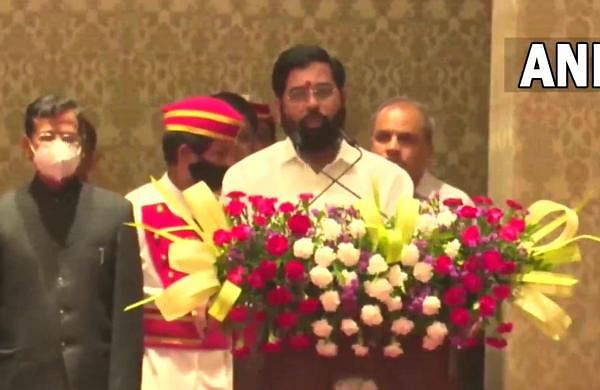 Governor Bhagat Singh Koshyari administered the oath of office to them at Raj Bhavan in south Mumbai shortly after 7.30 pm.

Earlier on Thursday, BJP president J P Nadda said Fadnavis would be part of the new Maharashtra cabinet led by Shinde, minutes after Fadnavis announced he will not be in the government.

Fadnavis had sprang a surprise when he announced that Shinde will be the next chief minister.

His announcement defied expectations that he would return to the post with the support of the Shinde faction.

“Development of the state is my priority. I will take all sections of society along with me,” Shinde told after the ceremony.

The meteoric rise of Shinde rivals Bollywood’s film scripts. An auto-driver with humble beginnings, he went on to become the right hand man of party chief Uddhav Thackeray, and his nemesis.

He then became the eyes and ears of Dighe, who used to be known as the “king of Thane”. Closeness with Dighe helped him get elected as a corporator in the Thane Municipal Corporation. Subsequently, Shinde became an MLA and the rest is history. Over the time, he reportedly amassed huge wealth and clout in the party. In the Maha Vikas Aghadi government led by Uddhav Thackeray, Shinde was handling plum portfolios of urban development and state road transport.

In 2019, when Sena was bargaining with the BJP over sharing of power, Shinde was dreaming of deputy chief minister post. That dream was clipped when Uddhav Thackeray decided to form government with the help of NCP and Congress.