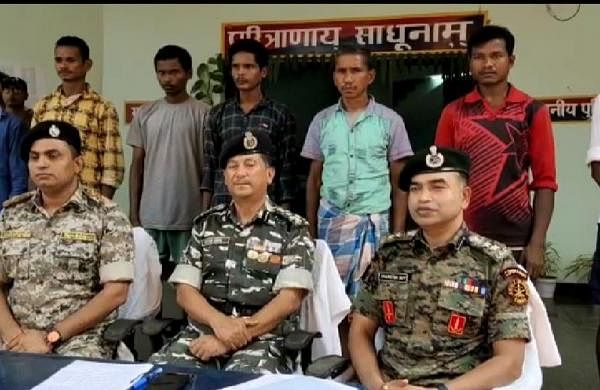 RAIPUR: As many as eight suspected hardcore Maoists, six of them carrying rewards on their heads, were taken into custody during the joint operation launched by the security forces in the forested terrain of Morepalli in the strife-torn Sukma district of south Chhattisgarh.

“Acting on a tip-off about the movement of Naxalites in the region, a joint anti-Maoist operation was carried out by the Sukma police and the 201 battalion of CoBRA, an elite unit of the CRPF, in the remote forested areas. During the search operation, eight people were detained and following interrogation their identities were revealed. The state government has declared rewards against six of them,” said Sunil Sharma, Sukma district superintendent of police.

After cross-verifying their identity, an FIR has been lodged and they would be produced before the local court, the SP added.

Those arrested included Kawasi Raju, a Maoist battalion cadre, and Kamlu Mada, a militia company commander, who carried rewards of Rs 8 lakh and Rs 5 lakh respectively besides four other cadres of the banned CPI (Maoist) organisation, each carrying a reward of Rs 1 lakh on their heads.

“The disclosures by the eight who were arrested led to the recovery of IEDs planted in remote inhospitable terrain. Such major joint campaigns will continue further and the security forces will ensure with their efforts to get rid of the areas cited as the rebels’ stronghold,” said Yogyan Singh, DIG CRPF (Sukma range).

Sukma is among the worst Maoist-affected districts in the country.