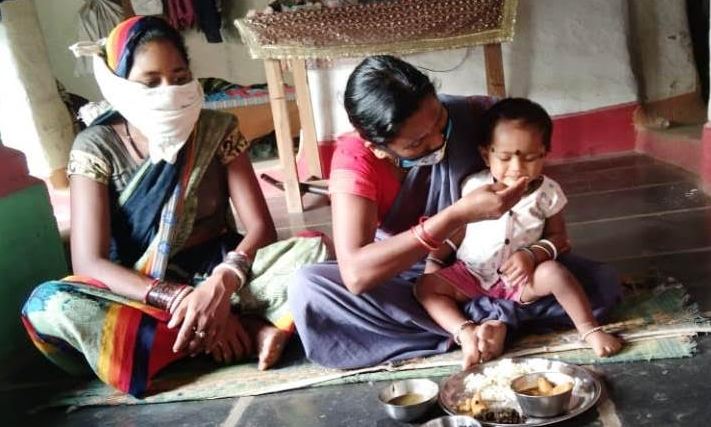 The campaign being run in the state to rid the children of malnutrition is showing positive results. This campaign is being conducted in every district specially according to the local conditions, which has yielded effective results. Special intensive nutrition campaign was launched to remove malnutrition in Manpur, Mohla and Chhuikhadan development blocks of Rajnandgaon district and extensive work was done to remove malnutrition in remote forest areas. Due to this, most of the severely malnourished children in Manpur block have come under normal category. There has been an increase in the weight of 272 severely malnourished children of Chhuikhadan block, while 126 severely malnourished and 22 children have come in the moderate to normal category. There has also been an increase in the hemoglobin level of 172 anemic pregnant mothers of the district. Health check-up of the children is being done every 15 days under the guidance of Collector Mr. Taran Prakash Sinha. Ready-to-eat dishes are being prepared and fed to the children. Continuous work is being done in the direction of malnutrition of severely malnourished children and pregnant anemic mothers by identifying them. Children and anemic mothers are being given breakfast and hot meals daily. It is also being continuously monitored. Nutritional level has been improved by giving chicken, egg, fruits and nutritious food in nutritious food. It has gained momentum by linking voluntary organizations, UNICEF, AIIMS with the campaign with community participation. In rural areas, awareness is being made about nutrition through Anganwadi workers and Gram Panchayat. Due to this, good results are coming out in forest areas also. Like this:Like Loading… Continue Reading

Government and private universities should adopt 5 villages each every year for community service: Governor Shri Patel