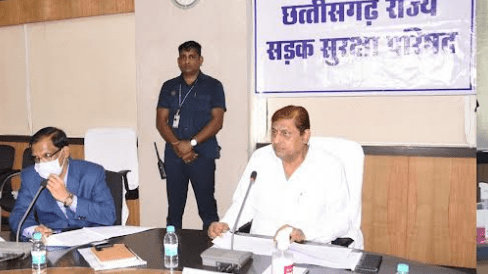 A meeting of Chhattisgarh State Road Safety Council was held under the chairmanship of Transport Minister Shri Mohammad Akbar in the meeting room of Mantralaya Mahanadi Bhawan located at Nava Raipur Atal Nagar today. He gave strict instructions to ensure effective implementation of all related measures for better and safe traffic system in the state. Along with this, special emphasis was laid on the coordinated efforts of all the concerned departments to improve the traffic including prevention of road accidents. Transport Minister Shri Akbar also directed to bring awareness among the people about traffic rules and ensure strict compliance in the meeting. On this occasion, the Chairman of Chhattisgarh Housing Board, Mr. Kuldeep Juneja and Secretary, Transport Department, Mr. Topeshwar Verma, Secretary Home Department Mr. Dhananjay Devangan, Additional Director General of Police, Traffic Mr. Pradeep Gupta and concerned departmental officers were present. During this, Chairman, Inter-departmental Lead Agency Road Safety and Joint Transport Commissioner Mr. Sanjay Sharma presented detailed information about the department-wise agenda. instructions for action. Similarly, he also directed for hazard marker boards on both sides of the culvert, bar marking in rumble strip, street lights and road repairs and asphaltization etc. as part of measures to prevent road safety accidents. Apart from this, for the improvement of roadside and garage, he directed to stop the haphazard parking of vehicles and operation of condoned vehicles and take necessary action. In the meeting, arrangements for speedy treatment of accident victims, status of Trauma Center in the state, inclusion of traffic education material in textbooks and challan action on violation of traffic rules and compliance of traffic rules etc. were discussed in detail in the meeting. Transport Minister Shri Akbar directed to take strict action for road safety and accident control by campaigning against excessive speed and drunken condition and driving without helmet. Similarly, while discussing in the meeting, he instructed not to keep unnecessary modes in the roads during road construction, so that there is no possibility of accidents on the roads due to the modes. During this, he also directed to conduct a thorough investigation by forming a joint committee of the concerned departments like Police, Transport and Public Works etc. to prevent encroachment and illegal construction at the junction of roads. He also directed the concerned departmental officers to take action against intensive checking of vehicles and installation of speed governors to control speeding and to take immediate action against drunken driving and driving stunts on the road. During this, special emphasis was given on public awareness to stop motor vehicle driving by minors. While discussing, he directed to get the potholes repaired in the roads promptly repaired for better traffic system. Along with this, all the concerned departments have been directed to complete the assigned works within the time-limit. It was informed in the meeting that an important scheme has been started by the Transport Department in Chhattisgarh to help road accident victims in emergency situations and to motivate the general public to save the lives of other injured. Name of the scheme “Grant scheme to reward the noble colleague who saved life by making prompt arrangements for transporting the accident person to hospital or emergency care center for providing necessary medical treatment to the accident person during the critical first hour of a motor vehicle accident”. ‘ Is. Under this, the amount of prize for each noble person is fixed at the rate of 5 thousand rupees per incident. They will also be awarded with a citation. It was informed in the meeting that in the year 2021 from January to November, 9820 persons were affected in 11 thousand 323 cases of road accidents, which is 8.09 percent in road accidents and 18.29 percent in death and injured cases as compared to the year 2020-21. An increase of 4.50 percent was found in Taking this seriously, special emphasis was given to all concerned departments to make coordinated efforts for prevention of road accidents. It is worth mentioning that in the year 2020 from January to December, out of total 3 lakh 23 thousand 649 cases of violation of traffic rules, 10 crores. Rs 9 lakh 77 thousand 590 and from January 2021 to November 2021, summon fee of Rs 10 crore 40 lakh 39 thousand 550 has been recovered in 3 lakh 59 thousand 675 cases. It was informed in the meeting that under the ‘Tunhar Sarkar Tuhar Dwar’ service of the Transport Department, so far more than 5 lakh registration certificates and the benefit of driving license have been received by the applicants sitting at home. The meeting was attended by the Chief Engineer, Public Works Department and senior officers of Urban Administration, Health, National Highway etc. Like this:Like Loading… Continue Reading