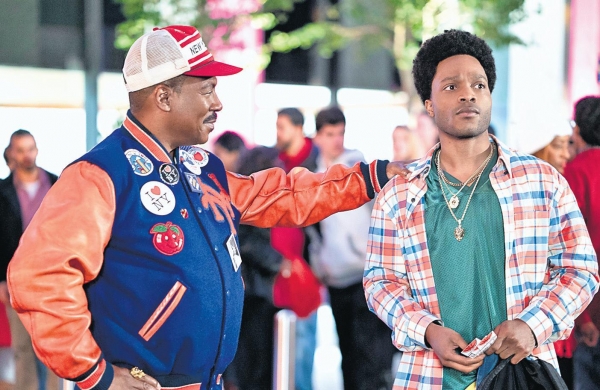 By Express News Service
One of Eddie Murphy’s biggest hits after Beverly Hills Cop was 1988’s Coming to America. The film gained cult status over the years. It was even unofficially remade in Tamil in 1990 as My Dear Marthandan by director Prathap Pothan.

Three decades later, Murphy returns as King Akeem Joffer in the sequel Coming 2 America, which will hit Indian screens this week. The film’s story is written by David Sheffield and Barry Blaustein, who have been collaborating with the actor since his early days on Saturday Night Live. Apart from co-writing the screenplay with Kenya Barris, they have also co-produced the film.

“I got a call from Eddie, out of nowhere, and he said, ‘I think I have a way we can do the sequel,’” remembers Blaustein. “After he gave me a brief synopsis of the idea, he said, ‘I want you and David to write it.’” That was four years ago. David Sheffield remembers their initial conversations with Murphy about shaping the story. “Early on, we talked about how everyone would want to see what’s going on with Akeem and Lisa (Shari Headley) and we decided that they should be happily married.

And we gave them three daughters. We also planted the seeds for a feminist statement with the oldest daughter assuming her rightful place and Kenya Barris took that and ran with it. He did such a great job and we’re honored to share credit with him.” Barris recalls his fondness for the first film. “Eddie was one of the biggest stars in the world when Coming To America came out and he took the opportunity to create a land where Black people were grand.” He further adds.

“The film is a Black fairytale and it pays tribute to our lineage, our heritage, and the royalty and realness of who we are, which means a lot. Then, of course, there’s the fact that it was one of the funniest and most beloved movies of all time.” The goal was to expand the story, but also bring back as much of the original cast as possible. “For Eddie and Arsenio (Hall), I think the film just builds on the friendship they’ve had forever. It was also fun trying to figure out how to put all the different characters back in there.

We tried to include everybody. If you were in the original movie for five seconds, we thought, ‘We’ll try to get you in there,’” quips Blaustein. The lead actors have effortlessly slipped back into the much-loved ensemble, Barris adds. “It’s like getting a chance to step into a time machine, but like the best time machine ever.” On Murphy and Hall reprising the multiple characters that are so beloved by fans, he continues, “Knowing that they’re friends in real life and actually seeing them work together again, you can really feel all of that energy in their scenes.