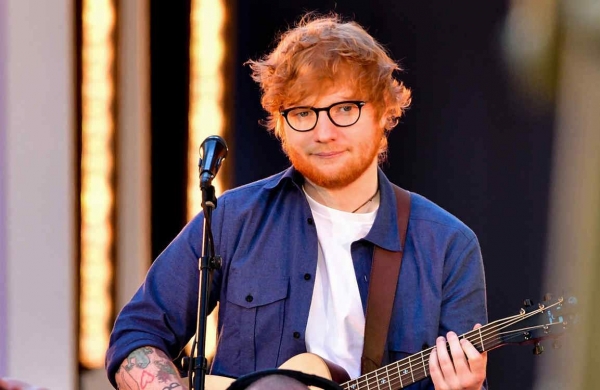 By ANI
WASHINGTON: Grammy-winning singer Ed Sheeran will be releasing his first solo single in four years, ‘Bad Habits’, later this month. Ahead of the song’s release, the singer shared a teaser clip of the track, which is sure to leave his fans excited.

The ‘Shape Of You’ hitmaker shared a snippet of the song on Instagram and confirmed the track’s arrival on June 25.

He wrote in the caption, “My new single Bad Habits comes out on 25th June. Pre-order/ pre-save now x (link in bio).”

The snippet features Sheeran dressed as a vampire in a hot pink suit, with baggy eyes and faux fangs that certainly look like they belong to the undead. His skin looks pale white (and undoubtedly ice cold), and the ‘Perfect’ singer had his signature ginger mane styled in a Twilight-esque swoop.

The singer’s look in the clip is surely giving us some major Edward Cullen vibes!

The forthcoming single will mark the first time Sheeran has released a single that does not feature a collaborator since ‘Happier’ from his 2017 album ‘Divide’.

“I’ve been working away in the studio over recent months and I can’t wait for you to hear ‘Bad Habits,'” the star said in a press release on Friday.

He added, “I always aim to push myself and my music in new directions and hopefully you’ll hear that on the new single. Feels great to be back!”

Last month, the singer seemingly dropped an Easter Egg when he told BBC Radio 1 about some of the “bad habits” he’s kicked during quarantine.

He said, “I’ve been really healthy, like kind of stopped all the bad habits stuff in my life. You know, started exercising every day. I was eating like a takeaway every single day, and now I don’t need to take away every single day and it’s been good.”

Specifically, he’s managed to give up indulging in “chicken wings and two bottles of wine every night.”

“I’ve been making a lot of songs, I’ve been keeping busy doing that. I became a dad, which is a seismic change in my life,” added the singer.

He will next perform live at TikTok’s UEFA Euro 2020 show on June 25 at Ipswich Town’s Portman Road stadium in England.

The Grammy winner had released the mellow acoustic song ‘Afterglow’ in December but said it was a ‘Christmas present’ not a single.

He then released the No.6 Collaborations Project in July 2019, which featured singers including Justin Bieber, Camila Cabello and Travis Scott.

On the personal front, the star welcomed daughter Lyra Antarctica Seaborn Sheeran in August with his wife Cherry Seaborn.