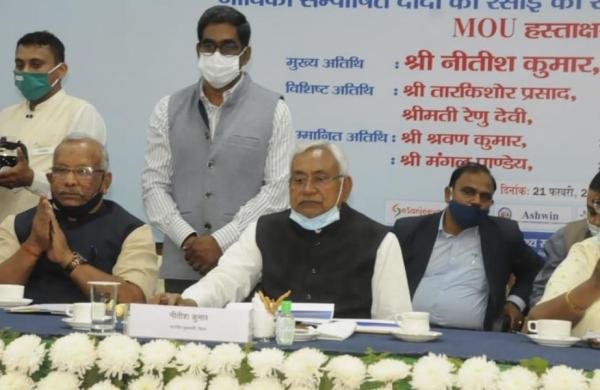 Express News Service
PATNA: Bihar on Sunday took a leap in providing health care facilities including telemedicine and other digital health care platforms as Chief Minister Nitish Kumar inaugrated the services of E-Sanjeevani, Ashwini portal, the Wonder-App and the Referral Transport Tracking system at a function organised by the state health department.

“Ensuring better healthcare facility to the people of the state is our prime concern and we have been working on it since came into power in the state. The technology based health services started here today will go a long way in providing good health care facilities to the people,” Kumar said after stating the services.

A Memorandum of Understating (MoU) was also signed in th presence of Nitish and CEO of the Bihar Rural Livelihood Promotion Society (BRLPS) alias JEEVIKA, Bala Murgan D and executive director of health services Manoj Kumar for running the first of its kind kitchen called ‘Didi Ki Rasoi’ in every government hospitals to provide free foods to admitted patients and their attendants at cheaper rates.

Speaking at the occasion, the chief minister, quoting a figure, said that before NDA came into power, only 39 patients were availing a public health centre per month but now, on an average, 11,500 patients turn up per month for getting health care services at PHCs in Bihar.

“Acting on the findings of a survey which showed that poor families in Bihar have to spend a large amount of their hard earned money on health-related problems, the state government has now started converting PHCs into community health centres with a capacity of 30 beds each,” he said.

“The new technology-based medical services are being made available and hospital buildings have been renovated along with many new ones built. Under the ‘Seven Resolves Part-II’ mission for making ‘Aatmanirbhar Bihar’, all health centres will be linked with sub-divisional and district hospitals by providing all medical facilities,” he said.

He hoped that the telemedicine services, Wonder APP and other digital platforms like the Ashwani portal and others will help people in the age of digital technology to get healthcare services swiftly.

Appreciating the move of providing free food to in-house patients at hospitals from the ‘Didi Ki Rasoi’ initiative, he said that Bihar is the first state in the country with 1.20 crore families associated with over 10 lakh SHGs running under the JEEVIKA care and command.

The kitchen service by SHGs had started on a pilot basis in seven districts – Buxar, Vaishali, Sheohar, Saharsa, Gaya, Shekhpura and Purnia – by the women associated with the SHGs. Today, this service has been extended in all hospitals of the state for free of cost to in-house patients on behalf of the government.

The MoU has been signed by the health department with the BRLPS for next 5 years and the government will pay Rs 150 per plate Rs 150 to in-house patient. He also said that treatment to the patients through telemedicine at 1724 health centres in 38 districts of state has started.

Meanwhile, Principal Secretary (Health) Pratyay Amrit, who has brought a drastic change in health sector, said that the emergency ‘102 Ambulance Bihar’ app and the Ashwini portal among other services have been started by CM Nitish Kumar.