Dwindling poll fortunes or not so strong ideological moorings? Here is what experts saying on political exodus from Congress 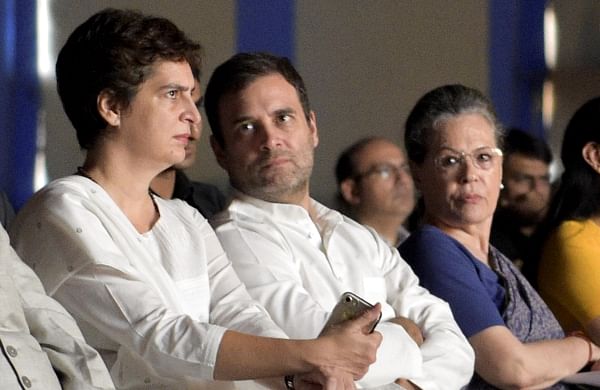 NEW DELHI: The ‘exit’ doors of the Congress swung open wider on Tuesday with senior leader RPN Singh striding out to join the BJP, abandoning decades-old familial associations to leave a party that that had only the day before listed him as a star campaigner in Uttar Pradesh.

Singh is the latest to join the ‘leave Congress’ bandwagon of leaders close to Rahul Gandhi — ‘Gen Next’ not just in terms of their age but also because they were following in the footsteps of their fathers to be part of a party now struggling to shore up its dwindling electoral fortunes ahead of crucial assembly polls.

Singh, a former Union minister and son of the late Congress leader CPN Singh, has joined the ranks of Jitin Prasada and Jyotiraditya Scindia who, too, quit the party to join the BJP over the last couple of years.

While Prasada is the son of Jitendra Prasada, Scindia’s father was Madhavrao Scindia, both Congress veterans.

According to political observer Rasheed Kidwai, author of “24 Akbar Road: A short history of the people behind the fall and rise of the Congress”, there is a pattern in those leaving the Congress.

They were mostly dynasts who got high posts at an early age and had not been ordinary Congress workers.

He also said the Congress was facing the problem of being unable to split itself as had happened in the 1960s, and leaders continue to pull in different directions.

Political commentator and Jawaharlal Nehru University (JNU) professor Sanjay K Pandey added that the Congress’ dwindling political fortunes have been a major contributing factor in the exodus of leaders as they see better prospects in crossing over to another party.

However, for those switching over to the BJP from the Congress, it also raises issues that their ideological moorings are not strong, Pandey said.

That the Congress had on Monday listed Singh as one of its 30 star campaigners for the first phase of elections in Uttar Pradesh is indication that the leadership may have been taken by surprise with his decision to join the move, observers point out.

Soon after Singh quit the party and joined the BJP, the Congress said it is fighting an ideological battle in which only those with courage can carry on and not cowards.

Some Congress leaders also questioned how the party could let such a situation arise — that Singh left a day after being listed as a star campaigner.

“RPN Singh left just before the elections, after he was listed as a star campaigner in UP. This was not a coincidence. It was planned. He and his new collaborators wanted this to hurt. But the question for us in INC is, why did we let it happen this way? How did we not know?” Salman Soz tweeted.

“When will we realize that we need to promote those who truly believe in the ideology of @INCIndia? My friend @ShashiTharoor should be a member of the Congress Working Committee. He should be a star campaigner. Not the Jitins and RPNs and Scindias. Let’s get it right. My opinion,” he said in another tweet.

Singh, from an erstwhile royal family, was the party’s in-charge for Jharkhand where the party is in power along with the JMM.

He earlier represented the Padrauna assembly constituency and had defeated Swami Prasad Maurya from Kushinagar in the 2009 Lok Sabha polls.

Maurya recently quit the BJP to join the Samajwadi Party.

Singh, 57, was fulsome in his praise of the prime minister and the Union home minister.

“This is a new beginning for me and I look forward to my contribution to nation building under the visionary leadership & guidance of the Honourable Prime Minister Shri @narendramodi, BJP president Shri @JPNadda ji & Honourable Home Minister @AmitShah ji,” Singh tweeted before his joining.

He joined the BJP in the presence of the saffron party’s Uttar Pradesh in-charge and Union minister Dharmendra Pradhan as well as Scindia.

Both Scindia and Prasada also posted welcome messages for Singh.

“A warm welcome to senior leader and my brother Shri @singhRPN in the BJP family. I am sure that your excellent experience in public service will give more strength and energy to the resolve for the development of the party,” Scindia said on Twitter.

Prasada’s post said, “I welcome my friend and brother @SinghRPN to the BJP as he joins the movement under PM @narendramodi ji’s leadership to work for India’s rapid growth and development to establish its supremacy in the next decade.”

The story of senior leaders leaving the Congress for the BJP began ahead of the 2014 Lok Sabha elections when the party lost Haryana heavyweights Birender Singh and Rao Inderjit Singh.

Both went on to become ministers in Modi’s first cabinet.

There have been others too.

Then Assam Congress stalwart Himanta Biswa Sarma left for the BJP in 2015 and rose up the saffron ladder to become the chief minister of Assam last month.

Other prominent Congress leaders and former Union ministers who quit the party and joined the BJP include S M Krishna and Jayanti Natarajan.

It suffered a jolt in 2019 in Assam when its chief whip in the Rajya Sabha, Bhubaneswar Kalita, suddenly quit and joined the BJP.

He is now a BJP Rajya Sabha member from the state.

Also in the Northeast, the Congress suffered setbacks when its former chief minister in Manipur N Biren Singh joined the BJP in 2016, citing differences with then incumbent Ibobi Singh.

In Uttar Pradesh too, ahead of the 2017 assembly elections, former state Congress chief Rita Bahuguna Joshi quit the party and is currently serving as a minister in the Yogi Adityanath cabinet.

While the leaders quitting the Congress have cited various reasons for quitting, from not being heard by the leadership to leaving for better prospects, the party has repeatedly called out their weak ideological moorings.

Elections to the five states of Uttar Pradesh, Punjab, Uttarakhand, Goa and Manipur begin next month, an exercise being seen as a crucial litmus test for all parties before the general elections in 2024.