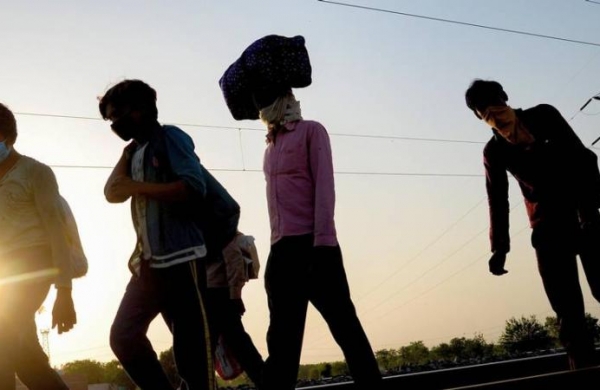 Express News Service
CHANDIGARH: The Ministry of Home Affairs (MHA) has written to the Punjab government that migrant workers from Uttar Pradesh and Bihar are forced to work as bonded labourers in border villages of the state and they are often given drugs which affect their physical and mental condition.

These facts came to light after the Border Security Force (BSF) rescued a few of them. Arun Sobti, Deputy Secretary (PR and ATC), MHA, wrote a confidential letter to the Punjab Chief Secretary and the Director General of Police on March 17 saying the BSF had apprehended 58 persons from the border areas of Gurdaspur, Amritsar, Ferozepur and Abohar in 2019 and 2020. During questioning, it emerged that most of them were “either mentally challenged or in feeble state of mind” and had been working as bonded labourers with farmers in border villages of Punjab.

The persons belonged to poor families from Bihar and UP, the letter stated. The MHA letter further said that human trafficking syndicates hire such labourers on the promise of good salary, but after reaching Punjab, they are exploited, paid poorly and meted out inhuman treatment. “For making them work for long hours in fields, these labourers are often given drugs which adversely affect their physical and mental condition. The BSF has been handing over the rescued persons to the state police for further necessary action.’’ The ministry asked state officials to look into the matter and take appropriate measures “to address this serious problem”.

Action taken may be informed to the MHA on priority, Sobti stated. Copies of the letter were also marked to Apurva Chandra, Secretary, Union Ministry of Labour and Employment, with request to issue suitable instructions to all states — especially Bihar, UP, West Bengal, Chhattisgarh, Jharkhand, Madhya Pradesh and Odisha — for generating awareness at various levels. When contacted, Punjab’s Additional Chief Secretary (Home) Anurag Aggarwal said: “The MHA letter did not have details. So, we have asked the deputy commissioners concerned to probe the matter and submit a report.

We will take action as per law.” However, Surjit Singh Bhura, vice-president of Punjab Border Kisan Welfare Society, denied any such thing was taking place. “The farmers of the border areas do not force labourers from UP and Bihar into bonded labour and also do not give them drugs. The narcotics come from Pakistan and the people of our area do not smuggle them,” he said. The Shiromani Akali Dal also termed the MHA missive as a “ridiculous assumption” aimed at defaming the Punjab farmers.

Former MP Prem Singh Chandumajra alleged the letter was self-contradictory and asked the Union home ministry not to make “illogical connections”. Chandumajra said such letters from MHA would send a wrong signal across the country and would create an atmosphere of confrontation. He said there was no FIR about any person being forced to work as a bonded labourer in any of the areas mentioned in the letter. “In fact, the opposite is true. Farmers of Punjab pay labourers in advance for their services and that’s why lakhs of migrant workers come to Punjab every year for planting crops,” he said.