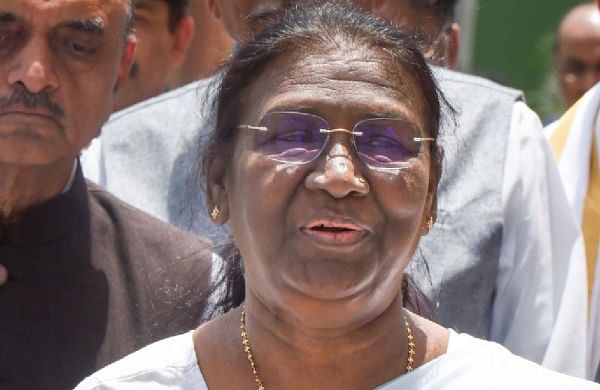 RANCHI: NDA presidential candidate Droupadi Murmu after getting emotional said that she is connected to Jharkhand by blood as her grandmother belonged to the state.

While addressing the MLAs and MPs belonging to the NDA fold in Ranchi, Murmu also recalled how after the announcement of her candidature, she expressed her apprehension before Prime Minister Narendra Modi that whether she will be able to do justice to the responsibilities of the first woman of this country, to which, Modi responded, “The Constitution will guide and show you the right path.”

“Prime Minister told me that the way you groomed Jharkhand while being Governor of the state, I am confident that you will also be able to fulfil this responsibility quite efficiently,” Murmu said, adding, “He also assured me that I need not worry as the entire country is with me.”

Appealing to the NDA legislators and parliamentarians to support her candidature in presidential polls, Murmu doubted whether she could do justice for Jharkhand as she did while being the Governor.

Later, Murmu surprised everyone by meeting JMM Chief Shibu Soren and his son Chief Minister Hemant Soren seeking support for her. She was also welcomed by the Soren duo at Chief Minister’s residence.

Though the JMM is yet to decide on supporting Murmu or Yashwant Sinha, the delay in its decision despite showing its inclination is a matter of speculation.

Reacting to the meeting of Droupadi Murmu with the Soren duo, state Congress chief Rajesh Thakur said that if the JMM keeps away with the UPA candidate in presidential polls, it would not give a good message to the people of Jharkhand. He, however, said that everyone is free to make their own decision as the alliance was formed only for the contesting elections and not for voting in presidential polls.

Notably, Murmu was sworn in as Governor of Jharkhand in 2015 and has the credit of becoming the first Governor to complete full-term (2015-2021) in the state. Murmu’s term as Governor remained uncontroversial and it was she who refused to give assent to a bill approved by the Assembly seeking amendments to the Chhotanagpur Tenancy Act (CNT), 1908, and the Santhal argana Tenancy Act (SPT), 1949 in the wake of widespread agitation by tribals all over the state.

Not only that, she questioned decisions’ of the state governments on several occasions, but always with constitutional dignity and decency.