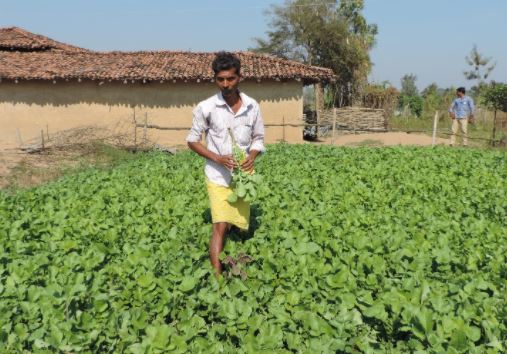 Both daily use water and drinking water supply became a major challenge for an Adivasi family living away from the village’s main road. There was a shortage of drinking water due to the joint tribal family of 17 people with no permanent means of water, as well as it was a compulsion to go to the water in the morning to get relief. Under the Mahatma Gandhi National Rural Employment Guarantee Scheme, the family, who got the diagnosis of the problem reached under the year 2017 Hamar Gaon Hamar Yojana, solved this problem by the well received under the Mahatma Gandhi NREGA scheme. The family of Sulochini Devi is now jointly using the perennial of the well for its daily use and now this family is working hard in the fields around their well, leaving a blank in the Rabi crop and in the fields potato onion tomato radish By planting vegetables like these, every year additional income of 25 to 30 thousand rupees has also started earning.

Suleachini Devi is now very old, her family’s son Sukhiram is the only one who takes care of farming and household. Sukhiram said that there was a huge benefit from the well’s construction. The biggest problem was for drinking water in the rain. She is now finished with the well being built. Also, there is always plenty of water available for the daily use of the whole family. After the paddy crop, we could not do anything, to work for others or to go for wages under MNREGA was the only option. But now well after the paddy crop, the mustard planted low water consuming crops like potato pea. With this, 25 to 30 thousand rupees are earned from vegetable cultivation. This year, Sukhiram had already planted a crop of radish and lalabhaji, which he has earned by selling 9 thousand rupees. Also, radish crop is also being prepared in his second field. With the creation of a well under MNREGA, this family of Sulochini Devi has now become self sufficient for their daily needs from the well as a small means of drinking water and irrigation.