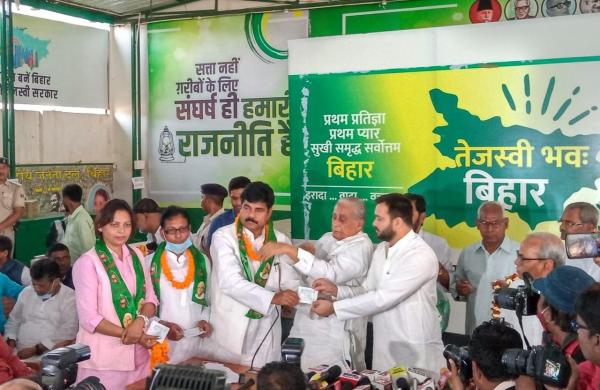 Express News Service
PATNA: Amid speculations that Bihar’s Rashtriya Lok Samta Party (RLSP) is likely to merge with JD-U, dozens of office-bearers of the Upendra Kushwaha-led party including the principal general secretary and others, joined the RJD on Friday.

Leader of the RJD Tejashwi Yadav welcomed all those who joined the party.

“There is nothing called sushashan (good governance) in Bihar. Nitish Kumar has ruined the state and he does not have the courage to take action against criminals and corruption”, Yadav said.

He lambasted the Nitish government for not taking action against the brother of a BJP minister after liquor was seized from his school premises in Muzaffarpur recently.

Yadav accusing the state government of patronizing and protecting the criminals politically.

“Now, Nitish has stooped so low that he is welcoming Upendra Kushwaha, whom he had once described as ‘nich’, said Tejashwi Yadav.

Prominent among others who joined the are principal general secretary Nirmal Kumar, Birendra Kushwaha, and Madhu Manjari.

All those who joined the RJD lambasted Upendra Kushwaha for his decision to merge RLSP with JD-U.