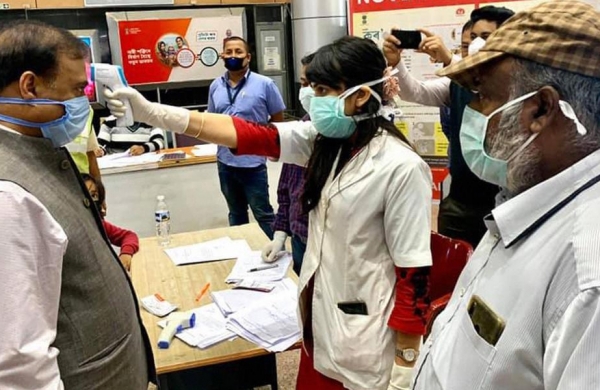 By PTI
GUWAHATI: The double mutant strain has been detected in some passengers who tested COVID-19 positive at Assam’s Dibrugarh airport, Minister for Health and Family Welfare Himanta Biswa Sarma said on Thursday.

Recent samples of passengers taken at the airport are “positive for B.1.617 strain or the Indian double mutant (L452R and E484Q) strain of SARS-COV-2,” he tweeted.

The strain spreads “very fast and is extremely dangerous. I appeal to people to be very careful as there is no alternative to caution”, Sarma told reporters after attending an all-party meeting called by Chief Minister Sarbananda Sonowal.

“In India, the UK and Californian strains have combined to form the double mutant strain and its birthplace is Maharashtra, from where it is spreading to other states,” he said.

There are speculations in certain sections that vaccines might not work in positive cases with these strains, but these are to be verified, Sarma said.

Earlier, the minister had claimed that the UK mutant strain has also been found in Assam.

Meanwhile, the state government issued another SOP, stating that in districts with over 100 active cases, coaching institutes will function with 50 per cent capacity, while pregnant teaching/non-teaching staff and those with children below five years shall be exempted from attending schools and coaching institutes.

This development comes after as many as 385 passengers, who landed at the Silchar airport on Wednesday, created disorder and fled the facility to escape mandatory COVID-19 testing, officials said on Thursday, and asserted criminal action will be initiated against them.

Cachar District Additional Deputy Commissioner (Health) Sumit Sattawan said a total of 690 passengers arrived at the airport from various parts of the country aboard six aircraft.

He said they were supposed to undergo swab tests at the airport and the nearby Mahatma Gandhi Model Hospital in Tikal.

Sattawan said hundreds of passengers created chaos at both places, mainly over payment of Rs 500 for the tests, the government-fixed rate.

The Assam government has made it mandatory for all air passengers arriving in the state to undergo a free Rapid Antigen Test and an RT-PCR test for Rs 500 even if the report of the RAT comes negative.

Asserting that the passengers had violated the rules, the officer said, “We have their database and will track them. We will initiate criminal action under Section 188 of the IPC (disobedience to order duly promulgated by public servant) and other relevant provisions.”

The ADC later filed a complaint with the Cachar Superintendent of Police against the violators, seeking initiation of proceedings for flouting government orders and putting the society at risk during the pandemic.

“A total of 385 passengers skipped mandatory testing at Silchar Airport,” he said in the complaint, containing the list of the violators with mobile phone numbers received from flight carriers.

Of the 690 passengers, 189 were tested and six found infected with the virus.

Many were exempted from testing as they were transit passengers on way to neighbouring states like Manipur, Mizoram and Tripura, Sattawan said.

In a statement late on Thursday, Silchar airport director said the incident was not reported inside the airport and “no passenger escaped from security checks or from the designated area at the passenger terminal building”.

“However, the matter was related to the screening of the arriving passengers by transporting them from outside the airport, through ASTC buses to the Mahatma Gandhi Model Hospital, Tikal (Salganga).

There, both RAT and RT-PCR tests are being conducted by the district health department,” it added.

Quoting Sattawan, the Airports Authority of India release said around 300 passengers moved out of the system without being tested, shouting at health department personnel.

The district health officials and workers were caught off-guard as they didn’t anticipate “so much indiscipline” from flight passengers, AAI said.

“Air passengers escaped from outside Silchar airport or the testing site rather than the airport,” it added.

The Assam government had on Wednesday night announced that people coming from outside will have to undergo seven days of compulsory home quarantine, as the state’s COVID-19 tally shot up to 2,29,138 with 1,150 fatalities.